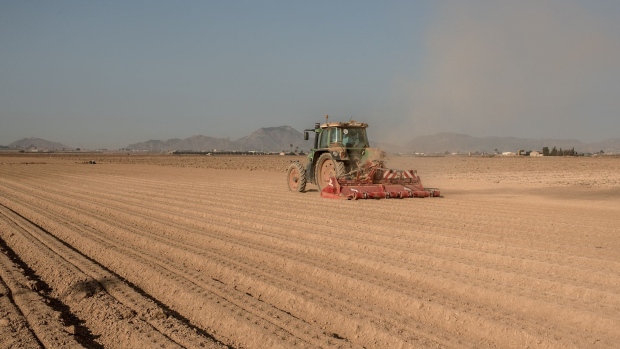 A tractor kicks up dust as it drives through an unplanted field of the agricultural region of El Campo de Cartagena in Los Alcazares, Spain. , Photographer: David Ramos/Getty Images

Crushed rocks could one day draw down billions of metric tons of carbon dioxide from the air.

The idea, often referred to as “enhanced rock weathering” (ERW), is among a handful of negative-emission technologies beginning to gain traction as the world struggles to lower greenhouse gases. The idea is simple: Grinding up certain types of rock and spreading them across a large land area can accelerate the Earth’s natural rate of carbon absorption.

It might sounds far-fetched, but, scientifically speaking, it could work. The remaining questions are ones of cost and scale, but a new study suggests both could be within reach. Cutting fossil-fuel use remains first priority, but the decades-long delay in lowering emissions means we’ll also have to rely on negative-emissions technology to draw down carbon dioxide from the air.

“Prior to our work, the evidence [on ERW] was scattered,” says David Beerling, director of Leverhulme Centre for Climate Change Mitigation at the University of Sheffield. “Our study is the first detailed, comprehensive analysis of what it might deliver for carbon capture if deployed at scale.”

Beerling is the lead author of a paper published last week in Nature showing that, if deployed at scale under the right conditions, ERW could capture between 500 million and 2 billion metric tons of carbon dioxide from the air at a cost of between $80 and $180 per metric ton. That’s many times the current price of carbon in the world’s largest markets, but it’s in line with World Bank estimates for what the price of carbon ought to be in the decades to come if the world is to hit goals set under the Paris climate agreement.

Here’s how it works. Basalt, a common rock variety, contains minerals of silicon, iron, calcium, magnesium and aluminum. By grinding up basalt into granules slightly bigger than table salt and spreading them across a field, you allow those minerals to be absorbed into the ground. Eventually they leach into water bodies, lowering their acidity and allowing the water to absorb more carbon dioxide from the air. That absorbed carbon dioxide is eventually consumed by tiny marine organisms called phytoplankton, which die and settle down at the bottom of the ocean floor—along with the carbon they consumed during their lives.

The benefits don’t just accrue to the climate. Silicon and iron replenish depleted soils and boost crop production (which on its own may increase absorption of carbon dioxide), while calcium, magnesium, and aluminum salts reduce soil acidity. Acidic soil is a problem for as much as 40% of the world's arable land, and the added minerals make the ground more hospitable for the microbial communities that also help crops grow.

To some degree, rock weathering is already capturing some carbon from the air. Natural processes such as strong winds, running water, and even the heat from the sun continuously grind down rocks and spread the particles widely. But the key in ERW is the “E”: the process of weathering needs to be enhanced many times the natural rate.

Even with the findings established in the new paper, two big challenges remain. First, as with other even more seemingly far-fetched ideas such as solar geoengineering, there’s no guarantee that the theory works in practice. Large-scale trials will have to verify that the weathering process puts away carbon for good. Second, we don’t yet know whether ERW can be scaled up to make a meaningful difference on the world’s emissions trajectory.

Big trials are underway in Australia, Malaysia, and the U.S. involving dozens of hectares that replicate the workings of a typical commercial farm. The results from these trials are still years away from being published, but “preliminary data are promising,” says Steven Banwart, head of integrated soil, agriculture, and water research at the University of Leeds, who also co-authored the Nature study.

Scientists take samples of soil and water to measure the level of acidity and the radioisotopes of carbon present in it. They also install monitoring systems that help analyze the carbon cycle—carbon dioxide moving from the air to the plant to the soil and back again—playing out in real time.

Assuming all these studies make good on that promise, the U.S., China, and India are all places where ERW might provide the greatest opportunity to capture carbon. Each dedicates large swathes of land to agriculture and has warm climate, which speeds up the chemical process of drawing down carbon.

ERW is more expensive than carbon capture through reforestation or regenerative agriculture, but about the same or cheaper than if carbon dioxide is buried underground after being captured from power plants burning biomass or giant machines filtering the air. The cost comes mainly from the mining, crushing, and transporting of basaltic rock to farms. If the machines used for these steps were powered by renewable energy, then the net carbon sunk through the process would be on the higher end of the range the study calculates. It’s also possible that the technologies employed, especially rock crushing, could improve and lower costs in the long term.

The study didn’t calculate the monetary benefits that farms are likely to gain from improved yields, Banwart says, but if that’s taken into account then the net cost of capturing carbon through ERW could fall further. That would only be true, of course, after ERW overcomes a third major challenge: convincing millions of farmers that spreading crushed rocks on their fields is a good idea. The Nature study also didn’t assess the cost of spreading crushed minerals only on fallow lands, which could also capture carbon but won’t provide the co-benefit of boosting agricultural yields.

The field of negative-emissions technologies is still quite new, but it’s developing rapidly with governments starting to create programs with hundreds of millions of dollars in support. Does ERW have a better shot than others? “It’s too early to pick winners or losers,” Beerling says. “If we’re going to extract 10 billion [metric] tons of carbon dioxide from the air by 2050, we’re actually going to need a portfolio of different options.”