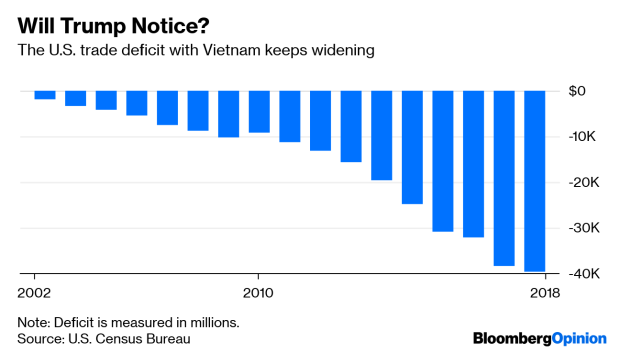 (Bloomberg Opinion) -- An Asian Communist state with a government-directed industrial policy churns out cheap goods for consumption in America. The country has a heavily controlled exchange rate, brandishes its low labor costs, enjoys a trade surplus and is wary of opening sensitive industries to foreigners. Add what might be politely described as some history of antipathy toward the U.S.

You might be forgiven for thinking that place is China, whose trade dispute with the U.S. is deepening. But no, it’s Vietnam.

Lured by the low cost of manufacturing, companies from Nike Inc. to Ikea have been redirecting parts of their supply chain from China to the Southeast Asian nation in recent years. Foreign direct investment in Vietnam has climbed for six consecutive years; the economy is humming, with a growth rate of about 7 percent; and the government is relaxing at least some barriers to foreign ownership. These are all reasons the country is often cited as one of the few winners from the trade war.

It also begs the question why, despite sharing many of China’s characteristics, Vietnam has avoided the ire of President Donald Trump and his army of trade protectionists bent on clipping Beijing's wings. If a much-less-threatening Germany — with its still-high costs of labor, democratic government and shared currency — can end up on the administration’s blacklist, surely Vietnam shouldn’t be spared.

This is the context in which to view the reporting of my Bloomberg News colleagues Saleha Mohsin and Jenny Leonard that the U.S. will expand the number of countries it scrutinizes for currency manipulation. Vietnam could be named a manipulator outright, according to people familiar with the situation. While the label isn’t consequential in itself, it’s worth considering as a warning of future policy trajectory — particularly for the growing number of businesses and investors that have considered parking their money and resources there lately.

What's probably saving Vietnam from Trump’s onslaught, for the moment, is its size. The country’s population of roughly 100 million people puts it on par with the Philippines, and its GDP is a mere 1% of the U.S.’s. Bottom line: It’s no China, geographically, demographically, commercially or militarily. Nor is it currently perceived as a threat to American strategic interests. In the past few years, Hanoi’s relations with Washington have been fairly amicable.

When I visited Hanoi in September, the optimism was almost unbridled. The air was thick with anecdotes about U.S., European, Japanese, South Korean and even Chinese companies scouting for sites in Vietnam as a way to escape the vagaries of economic rivalry between Washington and Beijing. Yet doubts are starting to creep in about whether Vietnam’s congested ports and roads can handle the influx of traffic; whether its workers have the requisite skills; and whether land costs are rising too briskly.

Is Vietnam’s scale too small to draw comparisons with China? Quite possibly. But its industrial strategy and development model bear a resemblance to Beijing’s decades ago.

The U.S. once saw a burgeoning Asian economy as the investment opportunity of a lifetime. Fleets of investment bankers and business leaders showed up telling anyone who would listen that the country was the next big thing and an ideal place to set up shop. Superlatives abounded. Troubled political relations were a thing of the past — and Western-style capitalism would make ties even smoother. It didn’t work out that way in China.

The bullish-on-Vietnam scenario might be the real thing. Yet it’s also worth asking what can go awry with the benefit of hindsight.