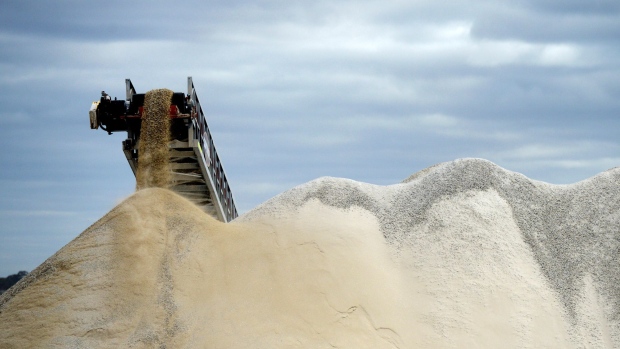 Lithium ore falls from a chute onto a stockpile at the Bald Hill lithium mine site, co-owned by Tawana Resources Ltd. and Alliance Mineral Assets Ltd., outside of Widgiemooltha, Australia, on Monday, Aug. 6, 2018. Australia’s newest lithium exporter Tawana is in talks with potential customers over expansion of its Bald Hill mine and sees no risk of an oversupply that would send prices lower. Photographer: Carla Gottgens/Bloomberg , Bloomberg

(Bloomberg) -- Tianqi Lithium Corp., a Chinese supplier of the key material used in batteries, is planning to raise as much as $2 billion in what’s set to be Hong Kong’s biggest listing this year, according to people familiar with the matter.

The Chengdu-based company, which is already listed in Shenzhen, is offering shares at HK$69 to HK$82 each, said the people, who asked not to be identified as the information is private. The price range is at a maximum 52% discount to its A-share price at Wednesday’s close.

Reuters reported the price range earlier on Wednesday. A representative for Tianqi Lithium declined to comment.

Big IPOs almost entirely vanished from Hong Kong’s exchange in 2022, as surging inflation, rising rates and the war in Ukraine added to woes tied to Beijing’s crackdown on the nation’s tech firms and overseas listings. While several small-ticket offerings were launched over the past week, total proceeds are still down 91% versus the same period last year.