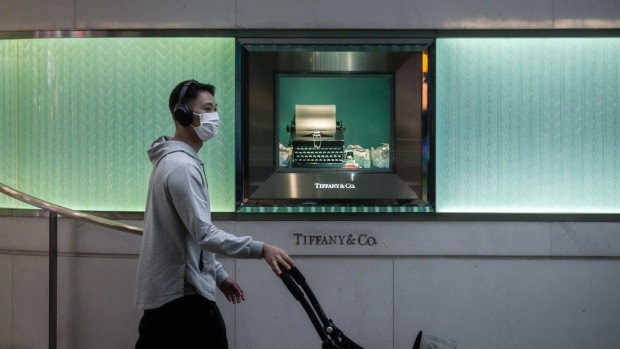 A pedestrian wears a face mask while pushing a stroller past the Tiffany & Co. luxury goods store at Times Square in the Causeway Bay district of Hong Kong, China, on Thursday, Feb. 6, 2020. , Bloomberg

Tiffany & Co. persuaded a judge to fast-track its lawsuit claiming LVMH is relying on faulty legal pretexts to cancel a US$16 billion buyout of the U.S. luxury jewelry store chain.

Delaware Chancery Court Judge Joseph Slights III on Monday rejected a request by the maker of Louis Vuitton bags and Moet & Chandon champagne that he put off the case until well into next year. But the judge also denied Tiffany’s bid to have the matter decided before the deal’s Nov. 24 closing date, setting a trial for Jan. 5, 2021.

The ruling puts pressure on Paris-based LVMH to justify cancellation of the luxury industry’s largest-ever deal, which was struck last November, before the Covid-19 pandemic devastated the retail landscape. LVMH has previously pointed to a letter from the French government seeking a delay in closing the deal because of a trade dispute with the U.S. It has also said its decision was driven by management missteps by Tiffany during the pandemic, such as continuing to pay dividends.

LVMH said it was pleased the trial was set for the new year. “LVMH is fully confident that it will be able to defeat Tiffany’s accusations and convince the court that the conditions necessary for the acquisition of Tiffany are no longer met, “ Jonathan Doorley, a U.S.-based spokesman for the Paris-based company, said in a statement.

Though Tiffany had hoped Slights would rule before the transaction’s Nov. 24 closing deadline, the judge said he was instead scheduling the trial with an eye on the Feb. 3 expiration of U.S. antitrust clearance for the deal.

Tiffany Chairman Roger Farah said in an emailed statement Monday that the company welcomed the ruling and said the trial “will hopefully lead to a ruling prior to the expiration of U.S. antitrust clearance and enable us to protect our company and our shareholders.”

The January trial date will force LVMH to decide whether it agrees to extend the transaction’s deadline or potentially face billions in damages if Slights finds it wrongfully pulled out of the deal, said Larry Hamermesh, a University of Pennsylvania law professor who specialized in Delaware corporate-law cases.

“If LVMH refuses to extend the date, they could find themselves in hot water with the judge, who’ll be deciding whether or not they are liable for pretty massive damages in this case,” Hamermesh said in an interview. Doorley declined to comment on whether LVMH will agree to extend the deadline.

Tiffany, which sued LVMH earlier this month, says in court filings that LVMH is trying to negotiate a lower deal price in the wake of the downturn in the luxury market. It has also pointed to the French company’s delay in seeking European Commission antitrust review as an example of bad faith. LVMH, which filed for the review on Sept. 18, has denied the allegation, saying the hold-up was due to the Covid-19 pandemic’s affect on regulators. The commission said it will submit its findings by Oct. 26.

For Tiffany, a collapse of the deal would bring uncertainty with investors missing out on the promised US$135 a share. On Monday, shares in Tiffany rose more than US$1 to US$115.21 in after-hours trading in New York.

While recent post-lockdown trends show a relative improvement for the brand known for its robin’s-egg-blue packaging, it isn’t out of the woods with international tourism still halted and Tiffany’s flagship store on New York’s Fifth Avenue virtually empty.

For LVMH, which is controlled by French billionaire Bernard Arnault, getting out of the deal would prevent it from overpaying for an asset that’s recently lost its luster and would need heavy investments in coming years to compete with brands like Cie Financiere Richemont SA’s Cartier.

The stakes are particularly high this time for Arnault, who is known as the wolf in cashmere. The fight with Tiffany risks turning into a lengthy and expensive distraction at a time when the luxury world needs to focus on its recovery. At the same time, reneging on such a large acquisition could also blemish his reputation as luxury’s top dealmaker.

At the end of Monday’s hearing, Slights suggested both companies should weigh whether to hold “productive conversations to avoid litigation,” meaning to hammer out a settlement to the dispute.