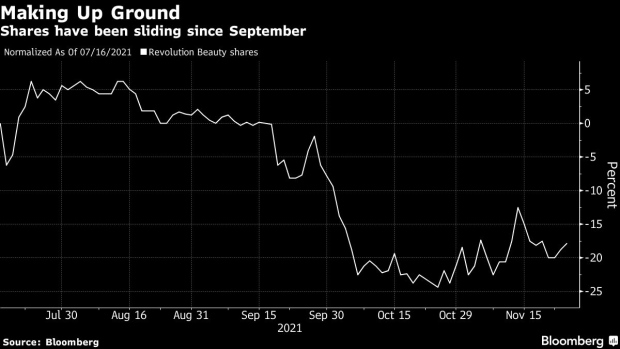 (Bloomberg) -- Revolution Beauty Group Plc, the recently-listed U.K. makeup company, is ramping up its U.S. expansion with plans to launch in 2,800 retail stores in the next three months.

The beauty company, which is well-known for its influencer marketing and has a large following on TikTok, said in its half-year results that it is launching Makeup Revolution with an unnamed “major new U.S. customer.” That tie-up will start with the roll-out into 2,800 mass-market stores, while it is also targeting the launch of Revolution Haircare in 870 Target Corp. U.S. stores early next year.

The shares rose as much as 3.9% in London, trimming declines since their July IPO.

Revolution Beauty had previously signed agreements to launch into 1,800 U.S. Target stores in the fiscal first quarter ending in May and 350 Boots stores in the U.K. in the fourth quarter. Overall sales for the company’s first half were up 39% to 78.6 million pounds ($105 million).