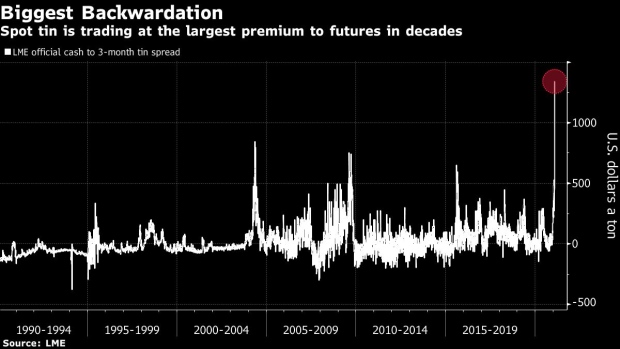 Official London Metal Exchange cash prices on Monday settled at the biggest premium to three-month futures since at least 1990. The spread -- which was at a discount as recently as early December -- has flared out dramatically in recent weeks, in a condition known as backwardation that’s a hallmark feature of a supply squeeze.

Tin prices have climbed to a six-year high as a global scramble for high-end computer chips boosts demand for the soldering metal, while a military coup in key producer Myanmar has also stoked fears about possible supply disruptions. With LME stockpiles nearing their lowest in more than 30 years, fundamentals appear to be moving firmly against spot buyers.

“The fund community has certainly started looking at it in much more depth,” Geordie Wilkes, head of research at Sucden Financial, said by phone from London. “Exports and production of semiconductors suggest solder demand had a very strong year, and it looks like that could continue, but unfortunately the supply side is lagging.”