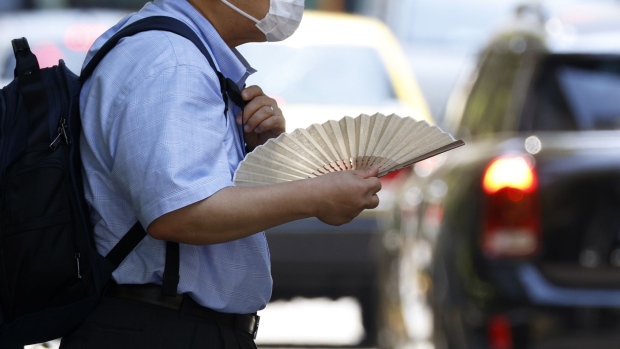 A pedestrian holding a folding fan in the Marunouchi district of Tokyo, Japan, on Friday, July 1, 2022. The government issued a heat stroke alert for several regions in the country including the nation’s capital, urging people to take health precautions amid scorching temperatures. , Bloomberg

(Bloomberg) -- Tokyo broke a record for the number of days of severe heat in a year by the mid-point of summer, underscoring the extreme weather that’s put the Japanese capital’s power grid under strain.

Temperatures reached 35 Celsius (95 Fahrenheit) for the 14th time this year in Tokyo, breaking previous annual records of 13 such days in 1995 and 2010, according to an official at the Japan Meteorological Agency. The authority uses that temperature level to categorize days as severely hot.

Blistering heat is affecting countries across the world this summer, straining energy networks and leading to death and suffering especially in developing nations. Soaring temperatures in Europe are drying up rivers and forcing government crackdowns on air conditioning use, while people in places like Pakistan and Bangladesh are having to deal with the heat amid daily blackouts because of expensive global fuel prices.

Sizzling temperatures in Tokyo have pushed the city to the brink of blackouts this year and prompted Japan’s government to ask business and residents to do more to conserve power. Some utilities are even giving rewards for households that cut back on usage.