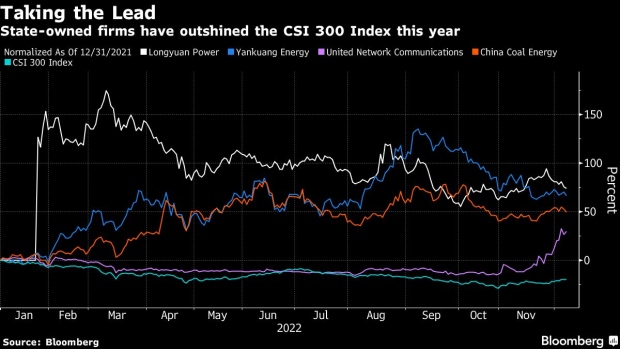 (Bloomberg) -- A top-performing Chinese private fund is wagering that a recent surge in state-owned enterprises could continue in 2023, buoyed by a catchphrase coined by regulators that’s triggered optimism in the long-unloved cohort.

Investors have shunned SOEs for years, given their reputation for low efficiency and greater focus on social goals over profits. Their shares outperformed, however, during November’s rally thanks to a new slogan “valuation system with Chinese characteristics,” which spurred a debate on whether the cohort had been given unjust discounts.

China has a sprawling array of state-owned firms that it uses as a vehicle to implement policy changes, provide stability and build infrastructure. SOEs are among the nation’s biggest companies, with the central government overseeing a total of 98 including PetroChina Co. and Air China Ltd.

The valuation gap between SOEs and the broader market should narrow after “appalling and unreasonable” declines, said Wang Wen, investing consultant at Shenzhen Ridou Investment Management Co. Regulators’ recent stance on such firms “is meant to undo prejudices and restore logic.”

The firm’s flagship product, the Ridou Qianniu Value No.1 fund, is up 58% this year as of Dec. 2, beating 99 percent of its peers, according to fund tracker Shenzhen PaiPaiWang Investment & Management Co. It’s outperformed the benchmark CSI 300 Index, which dropped nearly 22% in the same period.

“The phrase clearly shows the attitude from authorities, giving a timely direction for markets,” said Wang, who formerly worked for the government. “The surge is definitely more than just hype and could be a main theme going forward.”

The catchphrase also chimes well with Ridou’s preference for firms with high dividends and low valuations. Its flagship fund owes its 2022 returns to bets on coal and telecommunication shares, sectors widely dominated by state-affiliated companies.

Even after a recent buying frenzy that’s boosted the SSE 50 Index, a large-cap gauge heavy in financials, construction and utilities SOEs, Wang said valuations for the cohort could potentially increase by another 50%.

Bank of China Ltd. is trading at just 0.5 times book value in Shanghai, while each share of China Communications Construction Co. is worth just over 60% underlying net assets.

Regulators’ supportive messaging on the SOEs, which are market heavyweights, could lift broader equity gauges and benefit investors, Wang added.

“There’s no time to waste. Investors need to get ready to embrace the good times that are already here, as negatives come to an end,” he said. “We don’t see any pending risks in either liquidity conditions or valuations right now.”

--With assistance from Lin Zhu.