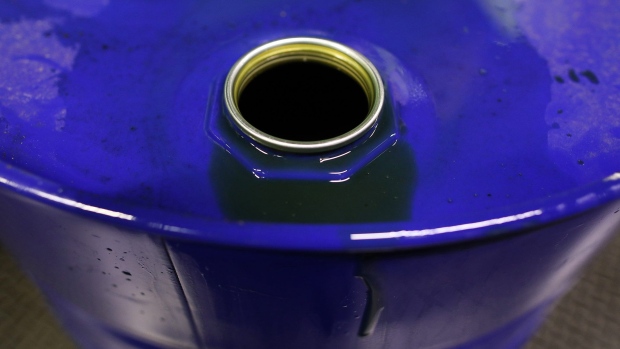 Excess fluid sits on the rim of a barrel of oil based lubricant at Rock Oil Ltd.'s factory in Warrington, U.K., on Monday, March 13, 2017. Oil declined after Saudi Arabia told OPEC it raised production back above 10 million barrels a day in February, reversing about a third of the cuts it made the previous month. Photographer: Chris Ratcliffe/Bloomberg , Bloomberg

Global oil demand has fallen as much as 20% from last year as more countries lockdown billions of people inside their houses in a bid to halt the spread of the coranavirus, the world’s top independent oil trader said.

The loss will continue at that level for at least a few weeks, Hardy said, contributing to an average annual decline of at least 5 million barrels a day, by far the largest the global oil market has suffered since reliable data is available from the early 1960s.

“There’s a lot of oil in the market and there’s a lot of stocks that we’re going to have to build, because it’s not going to be consumed,” he said, highlighting that the national lockdown announced on Tuesday in India has contributed to a fresh “substantial loss of demand.”

Vitol occupies a central position in the global flow of oil as the world’s largest independent energy trading house. With ships, barges and pipelines moving enough petroleum every day to fulfill the needs of Germany, France, Italy, Spain and the U.K. combined, the company enjoys one of the best overviews on global supply, demand and prices.

Hardy, a 54-year-old chemical engineer who has traded oil for decades, said that the only way to deal with the surplus was for refineries to cut their processing rates, and then oil producers reducing their own output, either willingly or via low prices forcing shutdowns.

Despite already falling 60% from January, Hardy said that Brent and West Texas Intermediate, the crude oil benchmarks, are going to come under further pressure, potentially falling below the $25 a barrel level. “We probably we have to drift a bit lower from here,” he said.

Oil prices will suffer the most as crude and refined products storage fill up to the very top of the tanks. “Then the market hits a wall, and then producers have to make decisions whether they want to carry on pushing oil into the market when there’s demand to take it,” Hardy said.