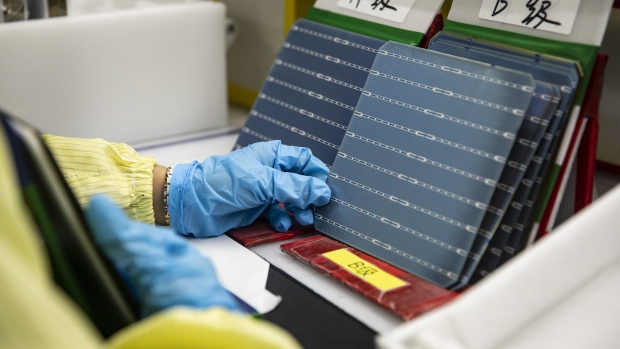 (Bloomberg) -- China’s Longi Green Energy Technology Co., the world’s largest solar-panel maker, is the latest in the industry to have shipments detained by U.S. customs as part of a crackdown by Washington over alleged human rights abuses in the Xinjiang region.

Longi had a total of 40.31MW of modules detained from Oct. 28 through Nov. 3, the company said in a filing to the Shanghai stock exchange. Shipments to the U.S. market continue as normal, and the detention has no major impact on the company’s operations currently, according to the statement.

The Biden administration started blocking imports of silica-based products made by Hoshine in June. The U.S. measure was designed to confront alleged human-rights abuses in northwest China’s Xinjiang region, where advocacy groups and a panel of United Nations experts say Uyghurs and other minorities have been forced to work against their will.

Nearly half the world’s supply of polysilicon, a major input material for photovoltaic panels, is produced in Xinjiang. Any detainments are expected to drive up the cost and demand for solar panels in the U.S., Roth Capital Partners said Tuesday in a note to clients.

(Adds detail in first paragraph, shares in the fourth.)