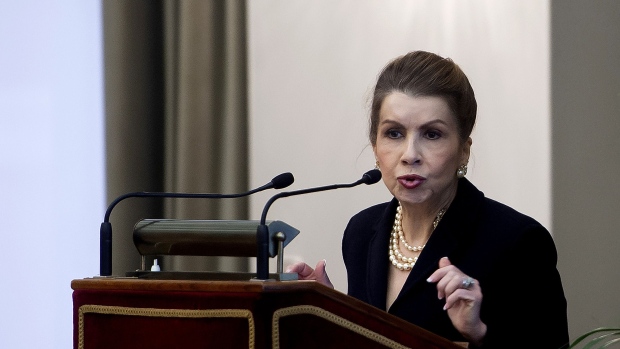 World Bank Chief Economist Carmen Reinhart said the coronavirus pandemic is turning into a major economic crisis and warned of the possibility of a financial crisis emerging.

“This did not start as a financial crisis but it is morphing into a major economic crisis, with very serious financial consequences,” Reinhart said in an interview with Bloomberg Television. “There’s a long road ahead.”

Reinhart, who took her new role in June, is best known for her work with then-Harvard colleague Kenneth Rogoff on the last financial crisis in their 2009 book “This Time Is Different: Eight Centuries of Financial Folly.” It made the pair the go-to resource on the history of government defaults, recessions, bank runs, currency selloffs, and inflationary spikes.

Asked whether central banks buying bonds to keep yields low is ultimately a zero-sum game when everyone’s doing it, Reinhart said, “This is a war. During wars governments finance their war expenditures however they can and right now there are dire needs.”

“The scenario we are in is not a sustainable one,” she added.

Reinhart spoke after the world’s richest nations agreed to renew a debt-relief initiative for the poorest through at least the first half of 2021, falling short of the World Bank’s call for a full-year extension.

China is owed almost 60 per cent of the money that the world’s poorest nations would be due to repay this year, according to World Bank data. It has made many loans to developing countries with terms that aren’t transparent and at higher interest rates than the nations can afford, the bank’s president said in August.

Asked about China not participating in the debt-suspension relief, Reinhart said the nation was in fact involved, just “less than fully.”

The China Development Bank, a major lender, hasn’t joined the effort, nor have private sector creditors, she said. “Full participation is something we should strive for but unfortunately haven’t yet seen.”