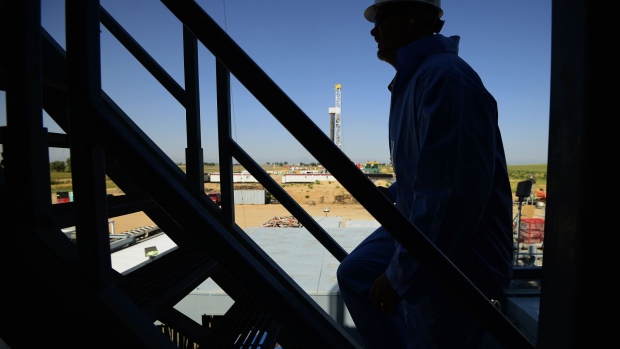 The silhouette of a contractor is seen walking up stairs at an Anadarko Petroleum Corp. oil rig site in Fort Lupton, Colorado, U.S., on Tuesday, Aug. 12, 2014. , Bloomberg

Shares of the Calgary-based royalty and energy infrastructure traded at C$12.94 at 12:18 pm on an “if, as and when issued basis,” slightly below its C$13 IPO price.

Topaz Energy and Tourmaline Oil Corp., its majority shareholder, raised C$230.5 million (US$175 million) in the Canadian stock sale on Monday, in which shares were sold at the bottom end of its marketed range. The sale was the biggest IPO to come out of Alberta’s energy patch since Kinder Morgan Canada Ltd.’s offering in 2017. Peters & Co. Ltd. and Bank of Nova Scotia led the sale.

Shares of Calgary-based Tourmaline gained about 4 per cent Tuesday, and have risen more than 16 per cent this year, outperforming the Canadian energy index, which has lagged roughly 39 per cent during the same period.