Toronto builders aim to lure millennial buyers to the suburbs

As Toronto home prices skyrocket, developers are betting they can lure millennials to a place they may have feared to tread: suburbia.

New projects in some of the city’s oldest suburbs are being pitched with walkable neighborhoods, condo towers, cafes, shops and a hip city feel. The phenomenon has been dubbed “hipsturbia.”

“Downtown Toronto is going to continue to thrive, but I think subway connected, suburban-urban locations are going to see a bit of a rebound in the next three to five years,” Sean Menkes, director of office and retail at Toronto-based Menkes Developments Ltd.

Menkes is working with public-pension manager British Columbia Investment Management Corp. on two projects in Vaughan, a suburb northwest of Toronto. Festival, a four-tower community with 85,000 square feet of retail, will follow last year’s launch of Mobilio. Both are located around Vaughan’s new transit-oriented city center.

West of Toronto in Mississauga, Oxford Properties Group and Alberta Investment Management Corp. unveiled plans this month to turn 130 acres near a shopping mall into the “Square One District,” an 18 million-square-foot neighborhood for 35,000 people that they call the largest mixed-use development in Canadian history. The plan will see a swath of parking lots remade into a community with 37 towers, more than 18,000 residential units, office and retail space.

Making a big, high-density bet in otherwise low-density suburbs can be risky. Real estate history is replete with boom-bust cycles in which developers piled into new markets too quickly. Empty office towers dubbed “see-through buildings” dotted Houston and Dallas for years after the twin collapses of the oil and savings-and-loan industries in the 1980s. 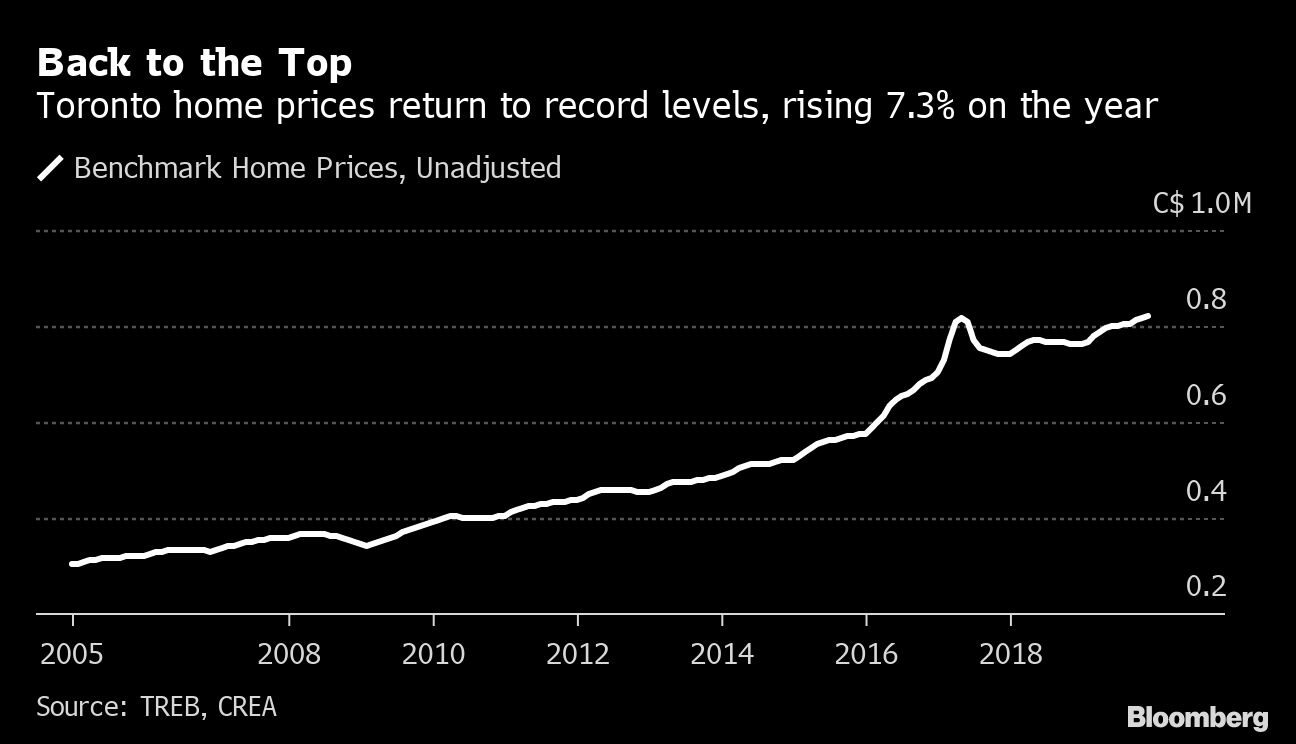 In Toronto, builders are responding to a years-long surge in Toronto home prices, driven by an influx of immigrants and the city’s booming tech and financial-services sectors. First-time buyers are finding it increasingly difficult to get a foot in the door.

PwC and the Urban Land Institute identified hipsturbias as one of the emerging real estate trends for 2020. Linked by public transit to 24-hour cities such as New York, San Francisco and Chicago, they have their own self-contained residential, office and entertainment districts.

Evanston, Illinois is one example, with Northwestern University providing a constant supply of young adults -- “the lifeblood of hipsturbias,” according to the report. Lake Michigan beaches, rooftop bars and rail access to the Chicago Loop help round out the elements of “coolness” in one of the Midwest’s oldest suburbs, PwC said.

“It’s a huge trend in the U.S. and it’s exactly what we’ve been planning for the last few years up in Vaughan,” said Jared Menkes, executive vice president of high-rise residential for the family-owned firm. “We’re bringing what we know downtown and bringing it to the suburbs.”

Homebuyers aren’t the only ones finding downtown Toronto expensive. With land prices and construction costs soaring and the permitting process beset by delays, developers are also seeking cheaper and easier projects farther afield.

Menkes has found success with previous real estate hunches. The 65-year-old firm, run by the late founder’s three sons and four grandsons, was a catalyst in extending Toronto’s downtown toward Lake Ontario to what’s now known as the South Core.

“We’re midway through a 20-year development cycle of our own where we’ll deliver just about 8 million square feet on the waterfront,” Sean Menkes said.

Menkes projects include Sugar Wharf, a 4.6-million-square-foot development with a 25-story office tower that will be the future headquarters of the Liquor Control Board of Ontario and the Toronto Region Board of Trade, 75,000 square feet of retail, five condo towers and a 2-acre park.

Down the road is another Menkes project, a 475,000 square foot office complex that will be home to London-based marketing firm WPP Plc and tech hub MaRS.

“I continue to believe in the waterfront,” Sean Menkes said. “We have a lot going on here and I don’t see us stopping.”