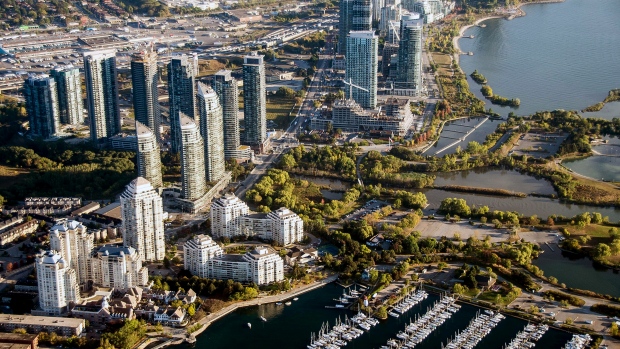 Condominiums stand along the shore of Lake Ontario in this aerial photograph taken above Toronto, Ontario, Canada, on Monday, Oct. 2, 2017. , James MacDonald/Bloomberg

Condo rents in the Greater Toronto Area have gotten pricier as it becomes harder to find vacant units amid strong demand, according to new data from the Toronto Real Estate Board.

The data, released Monday, revealed the average rent for a bachelor apartment surged to $1,657 in the first quarter of 2018, a 10-per-cent-increase from the $1,507 average a year earlier.

The price surge was even greater for one-bedroom condo units as rents rose 11.4 per cent year-over-year in the first quarter to $1,995 per month, while the average two-bedroom condo rent rose 9.1 per cent over the same period to $2,653.

The data also found the number of condo rental listings fell during the first quarter, dropping 11.8 per cent year-over-year, and as a result, there was on average a 7.5 per cent decrease in leases being signed.

“As people have moved to the region to take advantage of quality employment opportunities, rental demand has remained strong,” said TREB President Tim Syrianos in a release. “The result has been heightened competition between renters, in an ultra-low vacancy environment, and double-digit rent growth in some market segments.”

“The GTA continues to be one of the most desirable locations to live in the world and will remain so over the long term.”