Merilee Wright doesn’t even officially own her condo in downtown Toronto yet and she’s already trying to sell it.

The 56-year-old former bank executive agreed to buy the two-bedroom unit before construction got underway in 2018, a time when surging valuations and rising rents made Toronto condos seem like a perfect investment. Now, with the COVID-19 pandemic sending rents plunging and spurring an exodus from dense downtown housing, the unit is complete and Wright faces a choice between paying out more on her mortgage than she’d collect in rent each month, or bailing out of her investment at a discount.

“Even if we get a tenant, after we close we’ll still have negative cash flow and that situation will exist until the rents in the city rebound,” she said in a telephone interview. “You’ve got kind of the perfect storm happening with downtown condos in Toronto right now.”

The worry for Canada is that its major cities contain a lot of other people facing the same problem.

The dense thickets of condo towers that have transformed skylines in Toronto, Vancouver and Montreal over the last decade were financed, in part, by tens of thousands of mom-and-pop investors buying individual units to rent them out. With rents continuing to drop, similar financial distress among these small-time landlords could become more widespread. Add in a potential deterioration in the broader economic climate as COVID-19 cases rise or vaccine delivery is delayed, and it could crack open a vulnerability in Canada’s otherwise hot housing market.

“The big picture is a weakening of the condo market,” said David Amborski, a professor of urban planning at Toronto’s Ryerson University. “The reason there are more condos coming on the market is because people are having these problems with cash flow. They’re saying this isn’t working anymore because rents are decreasing and there are higher vacancy rates.”

With condo rents on the Toronto Regional Real Estate Board’s listing service down 17 per cent from a year ago, research firm North Cove Advisors Inc. calculated that an investor paying today’s benchmark price of about $600,000 a unit, using a mortgage with a 20 per cent down payment, would wind up paying US$200 more each month than they collected in rent.

Though a rough estimate, the shortfall suggests this year’s drop in mortgage rates has not kept pace with the plunge in rents, particularly when landlords face additional monthly costs like condo maintenance fees and taxes on top of mortgage payments. 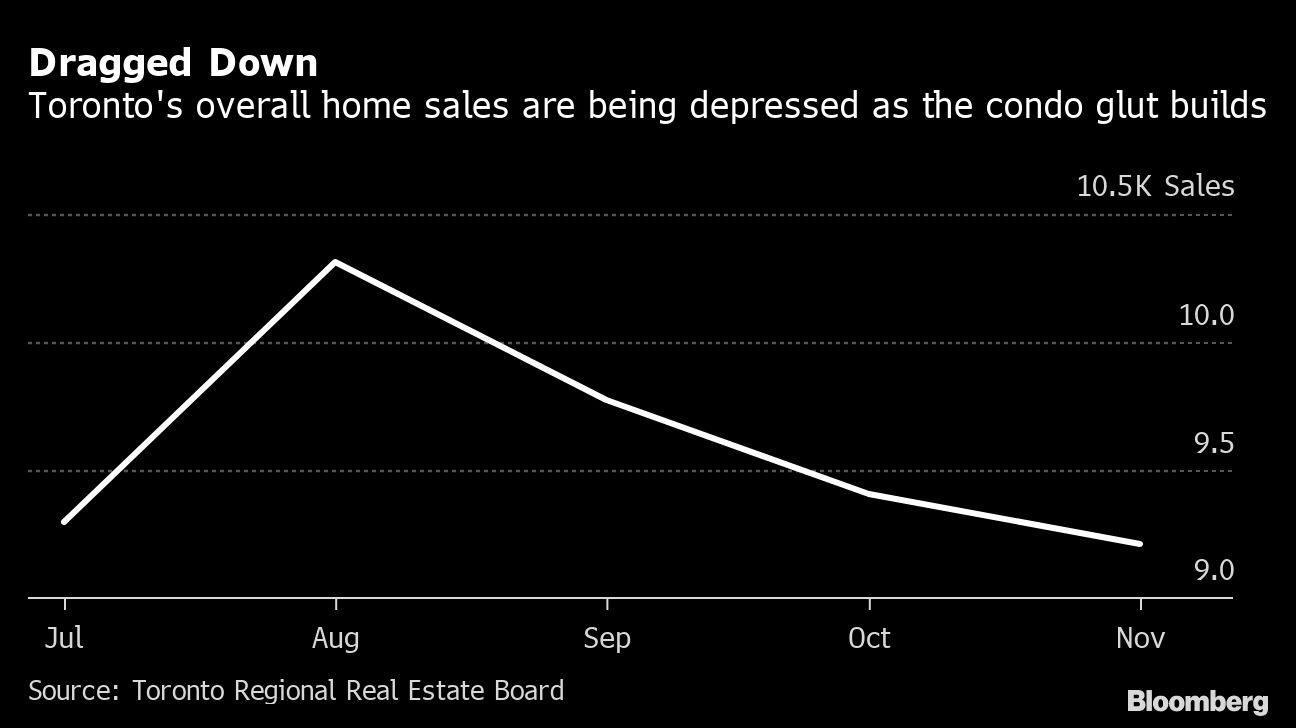 In Vancouver, similar distress is showing up in a public Facebook Inc. group frequented by Vancouver area real estate agents. Posts began appearing last month saying clients were willing to take a loss in order to get out of contracts for units finishing construction over the next year.

“Priced $55k below purchase price,” read one all caps message from Nov. 10, trying to sell a two-bedroom unit due to be completed in December. “Current owner is selling at a $50,000 loss,” said a post from Nov. 3 offering two bedrooms near Vancouver’s waterfront set to finish construction in the first half of 2021. The real estate agents who posted these and other similar messages on the group did not respond to Bloomberg News’ requests for comment.

“It’s the next six to 12 months that really is what’s going to be painful,” said Wright, the Toronto condo investor who reckons she and her business partner could sustain the losses, but is also looking for a buyer if she can find one. She called it a “reality check” on real estate investing.

Recent listing data in Toronto and Vancouver suggest it’s not just people who bought pre-construction who are now looking to get out of the market. The City of Toronto saw the number of condos listed for sale double in November from the year before, causing average prices to fall three per cent, the latest data from Toronto’s real estate board show. Meanwhile in Vancouver, the benchmark price for an apartment unit registered a one per cent drop from the previous month as listings rose there too.

And with large parts of Canada once again going into various levels of lockdown to counter a surge of COVID-19 cases, there’s little reason to think the pressures on Canada’s small condo landlords will ease. That could eventually affect demand for detached homes too.

“There’s a non-trivial portion of demand for single family homes that comes from people trading up from condos,” said Ben Rabidoux, president of North Cove Advisors, who estimates that share at around 20 per cent. “You are losing some of the trade-up buyers due to this pandemic. I don’t know if that’s enough to upend this market but it’s certainly a headwind.”