Mark Aston has met hundreds of teenagers and young adults at the youth homeless shelter he manages, but he will never forget the first time a Toronto Metropolitan University mechanical engineering student walked through his doors in 2019.

She was out of options: After a family breakdown, she couldn’t go home and she lacked the money to support herself in Toronto’s red-hot housing market, forcing her to turn to the shelter for help.

“I was astounded for a whole number of reasons,” Aston said. “One, that somebody could actually have that much turmoil going on in their life, that much instability, and yet continue to perform and stay in a really high-demand course.”

In 2019, 26 per cent of the residents of Covenant House Toronto, the shelter where Aston works, were students, of which half were college or university students. Today, Aston estimates the student total is closer to a third and may rise as rents soar. “It’s very much a trend that has mirrored the affordability issues with rental housing in Toronto.”

Toronto and Vancouver have among the tightest rental markets of North America’s major metropolitan areas, according to data compiled from the US Census Bureau and the annual Rental Market Report by Canada’s Mortgage and Housing Corporation.  Among the condominiums that have constituted the bulk of new rental supply in the Canadian cities in recent times, the vacancy rates stand at just 0.8 per cent in Vancouver, and 1.6 per cent in Toronto.

Lack of supply is one of the reasons rents for one-bedroom apartments have increased 20 per cent since last year with monthly costs now averaging CUS$2,269 across Greater Toronto. The end of COVID restrictions has meant increased demand for housing in city centers. Rising mortgage rates are putting more pressure on rents by pricing many prospective homebuyers out of the market. Toronto’s mayor, John Tory, is running for re-election on a housing affordability platform but adding new stock will take time. 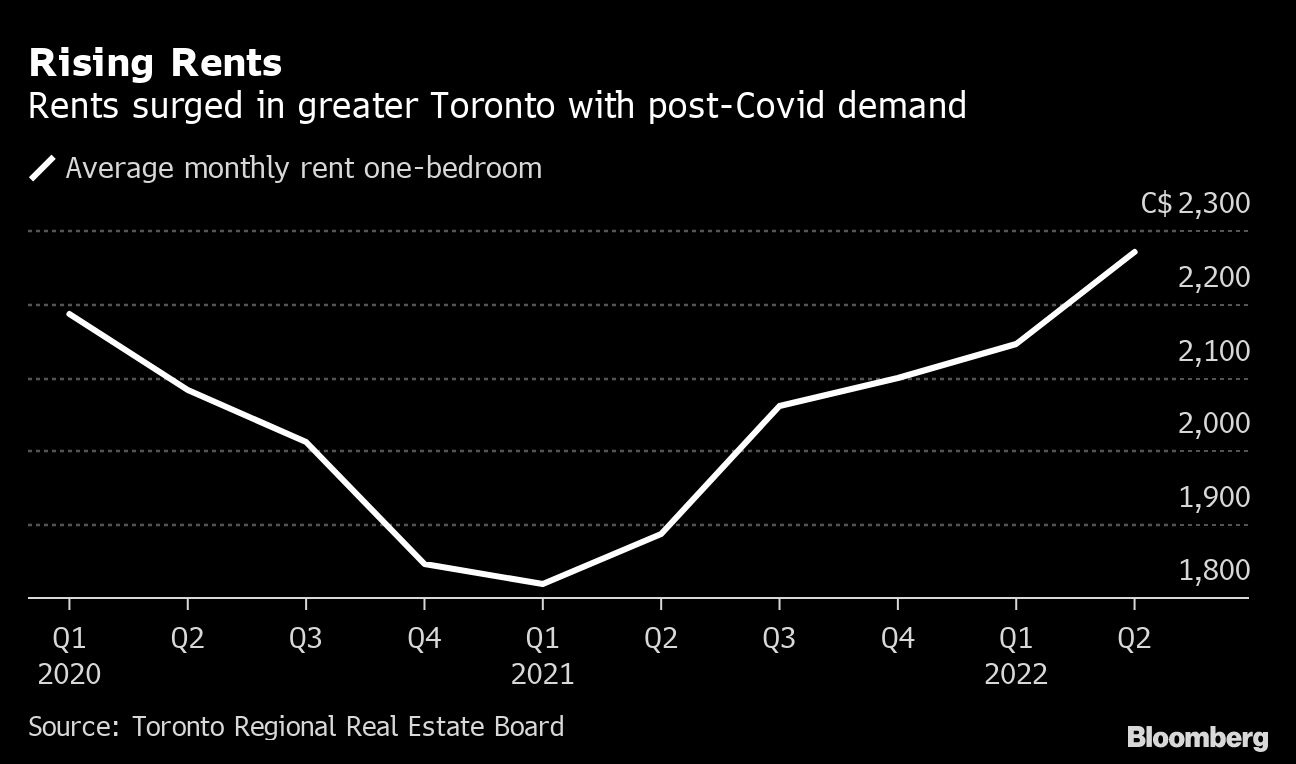 Nation-wide, Canada needs to build an extra 3.5 million units to achieve affordability, said Aled ab Iorwerth, deputy chief economist at the CMHC. “We need more supply, we need more diversity of supply, and we need supply to be developed faster,” he said, “so in the context of students, maybe there’s a need for more on-campus student housing.”

University tuition is heavily subsidized in Canada: domestic undergraduate students pay on average CUS$6,693, much lower than the US, but residence costs can add another CUS$13,000 to CUS$22,000 a year and most schools only guarantee housing to students in first year. University students — especially those from lower income families, or lacking family support — are among the most vulnerable to fluctuations in housing. Aside from finding affordable rent, many have to manage the costs of food, transportation, and tuition, while working entry-level, minimum-wage jobs. There are grants and loans available through the government as well as some university supports, but eligibility criteria stop some from applying and the amounts are not always sufficient.

At Horizons for Youth, a Toronto shelter for teenagers and young-adults aged 16 to 24, the average stay before the pandemic was three months, said case manager Sara Jaggernauth. Now it’s closer to six months to a year and demand keeps rising.

A second-year computer science student at the University of Toronto, who asked that his name not be used, arrived at the shelter after his university dormitory access ran out at the end of first year.

He tried looking for a basement apartment, or a roommate who could share costs, but couldn’t find anything affordable. As he prepares to begin classes again next month he says he’s anxious about the workload and worried about how he’ll manage the commute from the shelter, which can take up to an hour.

“When a kid turns 18, people think they’re adults, so they think they can handle all these responsibilities,” said Joy Edobor, development and communications associate at Horizons for Youth. “And then you’re living in Toronto and you have to think of all these expenses. It’s a lot to manage for a young adult.”

“He was the valedictorian in his high school.”