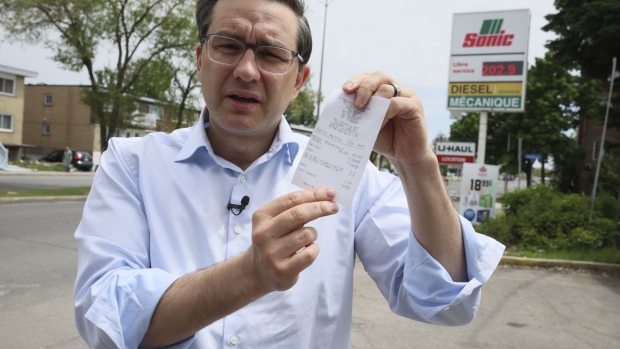 Pierre Poilievre highlights the soaring price of gas during a campaign stop in Laval, Quebec on May 24. , Bloomberg

(Bloomberg) -- Pierre Poilievre has been riding a wave of support among working class men to become front-runner in the race to lead Canada’s main opposition Conservatives, but polling suggests he faces regional and demographic barriers in his bid to defeat Justin Trudeau in a general election.

Just 17% of Canadians prefer Poilievre as prime minister, compared to 24% for Trudeau, according to a poll by Nanos Research Group for Bloomberg News. Jean Charest, the former Quebec premier who is the 43-year-old firebrand’s main rival in the Conservative race, has 13% support.

Poilievre -- who was endorsed last month by former Prime Minister Stephen Harper and has vowed to fire the governor of the Bank of Canada if he becomes prime minister -- leads Trudeau among men, non-college graduates and people who can’t work remotely from home, the data show. He lags badly, however, with women, older Canadians and university educated voters.

In French-speaking Quebec, with one quarter of the country’s population, Poilievre is favored by just 6% -- by far the lowest of the main contenders.

Born in Calgary, Poilievre has represented an Ottawa-area district since 2004. He is running a populist campaign on the theme of freedom from the “elite gatekeepers” purportedly controlling Canadians’ lives and voiced support for the trucker-led convoy that occupied the capital city’s downtown core for weeks at the start of the year to protest against vaccine mandates.

The numbers show that without broadening his base of support, Poilievre would have a very narrow path to victory. That’s not unlike Trudeau, who has eked out wins in the last two elections even though his Liberal Party finished second in the popular vote.

The poll also suggests that a Poilievre-Trudeau battle could end up being particularly divisive, with even sharper political fault lines centered around gender and class in addition to the rural-urban and East-West splits that have marked recent elections.

Poilievre’s path to victory becomes easier if he manages to win over Charest’s supporters, should he triumph in the September vote by party members. The former premier and Poilievre combined beat Trudeau in just about every demographic, except for women.

New Democratic Party Leader Jagmeet Singh, who agreed to support the minority Liberals in parliament until 2025 after Trudeau promised more spending on social programs, was preferred by 16% of respondents in the poll.

The Nanos survey of 1,038 people was conducted by phone and online between July 29 and Aug. 2. It is considered accurate within 3.1 percentage points, 19 times out of 20.