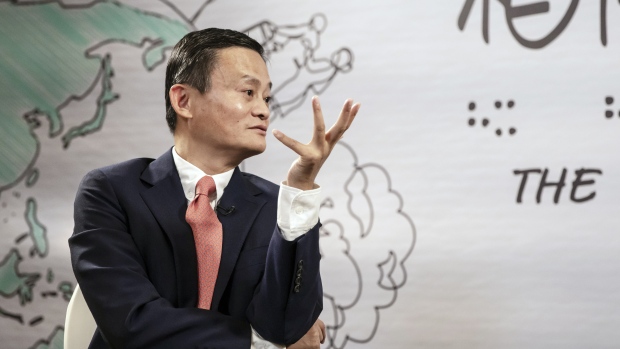 Billionaire Alibaba (BABA.N) co-founder Jack Ma called fighting over trade senseless and decried once again a widening conflict between the U.S. and China.

China’s richest person -- who warned just last month that a trade war could last two decades -- argued it was pointless to target goods because the Asian nation was on its way to becoming a major buyer of foreign products. Indeed, it’s services -- such as those on the internet -- powering job growth, not old-school manufacturing, the outgoing Alibaba Group Holding Ltd. chairman told a business forum Monday.

Ma, whose online commerce empire is China’s largest corporation, has been a vocal opponent of tit-for-tat tariffs imposed on hundreds of billions of dollars’ worth of U.S.-Chinese goods. Donald Trump is now exerting pressure on the Asian nation to wind back its US$423 billion trade surplus with the world. While the American President has floated the possibility of a deal when he meets his Chinese counterpart, Xi Jinping, in coming weeks, the two countries remain far apart on everything from market access to government support for state-run enterprises.

“Trade war is the most stupid thing in this world,” Ma said at the China International Import Expo in Shanghai. Xi, who addressed attendees in the morning, is touting the forum as a major showcase of the country’s purchasing power.

Ma’s comments come as Alibaba is on the verge of kicking off its most important annual shopping event -- Singles’ Day on Nov. 11 -- an online bargains extravaganza that often has a heavy foreign commerce component.

While Alibaba gets most of its revenue from domestic commerce, Ma and his fellow executives have championed China as a destination for foreign-made products -- American or otherwise. The company hosts major brands like Nike and Urban Outfitters on sites such as Tmall Global that showcase international merchandise for local consumers.

“It is the greatest challenge for China” to transform itself into an importing nation, Ma said. But that’s also “the greatest opportunity for the world.”

In October, Ma told World Trade Organization delegates that the Geneva-based body has come under threat from Trump’s efforts to recast the international trading system in a way that he says will be more balanced toward the U.S. The American president has this year targeted allies and adversaries alike, threatening tariffs on all of China’s exports, proposing levies on European car-makers and saying he could leave the WTO, which he has described as “unfair.”

Ma, who’s planning on retiring next year, has also said the global business community is opposed to the trade war. Roche Holding AG Chairman Christoph Franz was among those who echoed Ma’s comments on Monday.

“Swiss wealth is entirely created by open borders and trade, and that can serve as a lighthouse to other countries,” Franz told the same forum.