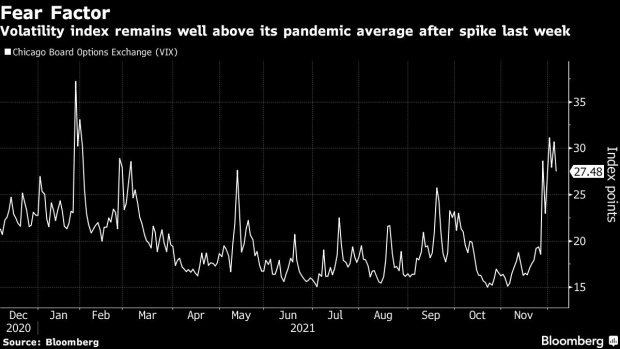 (Bloomberg) -- Investors wondering whether another Monday rebound marks the end of the latest bout of stock-market turbulence are seeing troubling signs in the volatility market.

The Cboe Volatility Index edged back below 30 Monday as the S&P 500 jumped 1.2%. But at 27, the VIX still sits seven points above its average for the year and the front-month futures contract is higher than ones in subsequent months, a signal that investors anticipate near-term turbulence to persist.

After Jerome Powell’s hawkish pivot last week, Federal Reserve officials have been muzzled ahead of the central bank’s next policy meeting. And investors will have to wait until Friday to get the latest reading on inflation, leaving several days without any major data points or commentary to change sentiment. That has investors scouring other indicators to determine whether a stretch of turbulence that’s delivered S&P 500 moves of at least 1% in six of the past seven sessions has run its course.

For Nicholas Colas, co-founder of DataTrek Research, the wild ride will persist, possibly throughout the rest of the year as investors assess a market that’s rallied more than 20% already. He recommends waiting until the VIX hits at least 36 -- but preferably 44 -- before buying back into equities. Friday’s VIX spike to 35 and close at 31 is not indicative of a bottom, he wrote in a note Sunday.

“We don’t mean these observations to be frightening since we remain longer-term positive on U.S. equities, but we think there’s little doubt markets are in for a bumpy ride this month,” he said. “History is simply too clear about how December goes when we’ve already seen excellent returns,” he said. “Investors face both Fed policy and near-term earnings uncertainty.”

Stocks have been swinging wildly since the emergence of the omicron variant sparked a risk-off rout Nov. 26. The S&P 500 rebounded the following Monday, only to have Powell’s pivot touch off the biggest two-day rout in over a year. Hedge funds have reduced exposure to stocks at the fastest rate in 20 months. And once-reliable retail dip buyers have seen their brokerage accounts walloped by routs in cryptocurrencies, SPACs and speculative technology shares.

Buyers emerged Monday, pushing stocks higher and Treasuries lower, but a late-session drop in the S&P 500 kept the VIX above 27. The past week’s stock gyrations have pushed the volatility curve, which is usually upward-sloping, to invert, signaling the uncertainty about the immediate future is higher than about what will happen several months out. The April contract is hovering 0.2 points above May’s, which, in turn, is trading 0.2 points above the one that expires in June.

Even though the inversion of the VIX term structure isn’t as pronounced as it was Friday, the so-called backwardation of the curve shows the anxiety about everything from the new Covid-19 variant to the Fed’s hawkish tilt is likely here to say.

Andrew Thrasher, a portfolio manager at Financial Enhancement Group, suggested the inversion might actually be good news for stock bulls with a view into next year.

“The premium being put into volatility futures is primarily in the front month contracts as we aren’t seeing the VIX futures curve move back into contango from April to June. This suggests the market is not pricing in a protracted increase in sustained volatility,” he said.

He also says Monday’s VIX pullback may be a sign the market is ready to resume its advance into the year end.

“The breakdown in market internals is still a concern, but the strength in the mega caps has put the weight of the index on their backs and prevented too much of the weakness of smaller individual equities from being reflected in the broad indices,” Thrasher said.

“Friday the VIX futures went into backwardation -- that is a sign the market is really facing some pressure,” he said in an interview on Bloomberg TV. “Today it has come off, but the VIX futures curve is still very, very flat -- which is concerning.”