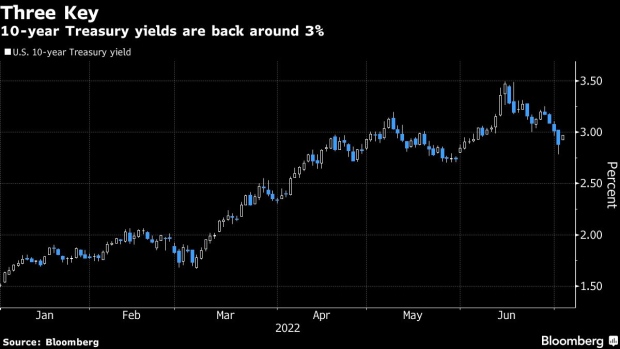 (Bloomberg) -- Treasuries fell across the curve Tuesday, as trading resumed after a holiday amid a rebound in risk sentiment on hopes the US may soon roll back some tariffs on Chinese consumer goods.

Short-end notes led the sell off with two-year yields jumping as much as 13 basis points to 2.96%, unwinding all of the steep declines seen Friday. The rate briefly exceeded that on 10-year notes after longer-dated yields climbed eight basis points. The first inversion since June 15 in that part of the curve underscores concerns the Federal Reserve will continue to raise rates aggressively despite the risk of a recession.

Inflation figures are in focus, with traders awaiting the next release of US consumer-price gains data on July 13.

“There’s still a very challenging set of conditions for bonds, with inflation elevated and still rising,” said Su-Lin Ong, a senior economist and head of fixed-income strategy for Royal Bank of Canada in Sydney. “There’s ongoing uncertainty around when it peaks but, more importantly, how sticky it might be into 2023.”