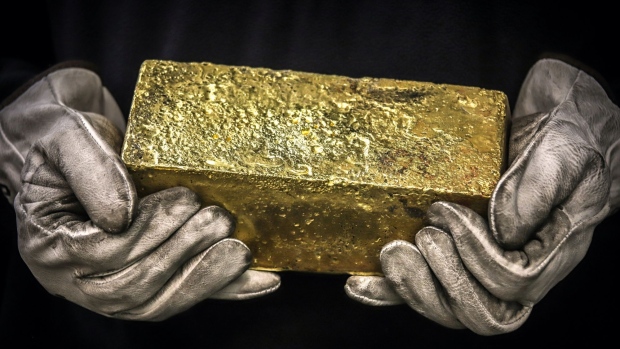 A Twenty kilogram gold brick is handled by a worker at the ABC Refinery smelter in Sydney, New South Wales, Australia, on Thursday, July 2, 2020. Western investors piling into gold in the pandemic are more than making up for a collapse in demand for physical metal from traditional retail buyers in China and India, helping push prices to an eight-year high. Photographer: David Gray/Bloomberg , Bloomberg

“The pipeline has been really robust and busy,” Chief Executive Officer Shaun Usmar said in a Bloomberg TV interview. “When I look at how we built this business over the five years, we have seen over 500 opportunities for the assets we’ve got.”

Usmar founded Triple Flag in 2016 as a gold-focused streaming and royalty company, and last week the firm made its Toronto Stock Exchange debut after closing its $250 million initial public offering. The Toronto-based company joins a growing list of publicly traded firms that help fund mining projects in return for part of their future revenues.

Streaming companies, which include Franco-Nevada Corp. and Wheaton Precious Metals Corp., give miners upfront financing in exchange for the right to buy produced metals in future at a discount. These firms are typically able to ink deals with big mining companies such as Barrick Corp. and Freeport-McMoRan Inc. when metals prices are declining and producers are desperate for cash -- circumstances opposite to what’s happening these days.

Gold and other precious metals prices have been given a boost this year from economic stimulus and low interest rates, though they were being buffeted Thursday as U.S. economic data fueled concerns the Federal Reserve may withdraw its support sooner than expected. Still, bullion’s appeal as an inflation hedge should lure back investors, especially when the Fed maintains its monetary stimulus and says price pressures should prove temporary.

“As consumers, we’re seeing all around us the signs of inflation, and I expect there’s a real risk that we could overshoot,” said Usmar, a former chief financial officer of Barrick. “You can’t help but enter that scenario where gold has a role to play in people’s portfolios and is really going to be the beneficiary.”

Often touted as digital bullion, Bitcoin’s rally in the first months of the year was demoralizing for gold bulls. Usmar said he “did a lot of thinking” on the relationship between the two and thinks they can be in “co-existence in the future.”

A global push for a cleaner energy economy means investors’ scrutiny on mining companies is higher than ever, which isn’t lost on Usmar. The CEO said Triple Flag is strict about who it partners with and where it puts its money in for its streaming deals.

“We have walked away from a number of transactions where even if we feel that there’s a potential risk to our broader portfolio,” he said. “We just don’t touch the third rail.”

Backed by billionaire Paul Singer’s Elliott Management Corp., Triple Flag sold 19.2 million shares in last month’s IPO for $13 each. The stock is little changed from its trading debut. Usmar said he expects Elliott to continue backing the company as an investor who is “very supportive, very rational, and very patient.”