Will there be a breakthrough moment in tonight's federal leaders' debate?

Prime Minister Justin Trudeau is heading into the final stretch of campaigning ahead of the Oct. 21 election retaining a firm lead on the crucial question of economic stewardship.

According to a monthly survey conducted by Nanos Research Group for Bloomberg News, 35 per cent of respondents say they trust Trudeau the most to promote economic growth, versus 27 per cent for Conservative Leader Andrew Scheer. The prime minister has held the lead in the poll for four straight months.

The Liberal leader has pulled ahead largely because the nation’s economic performance firmed up in recent months. This includes a recovering housing market, a rebound in economic growth in the second quarter and one of the strongest job markets in the past four decades.

At the same time, neither party leader has had much to say about how they plan to promote longer-term growth, and instead made pledges that focus on cost-of-living issues rather than providing coherent economic agendas. That gives Trudeau an advantage at a time when the economy is performing relatively well, Nanos said.

“Because both Trudeau and Scheer have focused on the cost of living, a dialogue on economic prosperity has taken a back seat to pocketbook issues and micro-promises,” Nik Nanos, chairman of Nanos Research, said in an email. “The result is that Scheer has not closed the gap on this.” 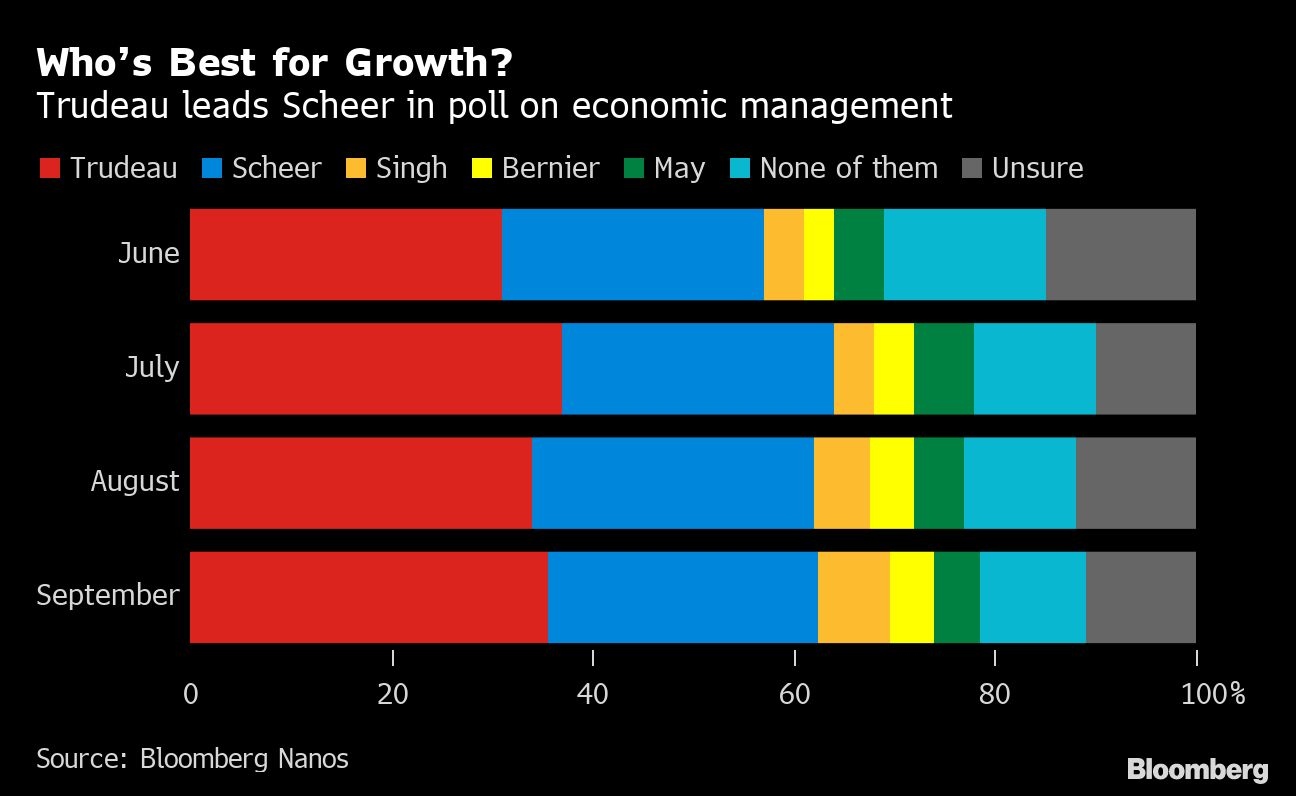 Throughout the election campaign, the party leaders have made affordability the key topic. They have offered measures aimed at cutting taxes, making housing more affordable and lowering prices for services like childcare, education and phone services.

The latest Nanos poll on economic stewardship was conducted between September 26 and September 30 and is considered accurate within 3.1 percentage points, 19 times out of 20.

A strong economy isn’t a guarantee of electoral success. It has, however, helped give Trudeau something positive to talk about after his campaign was sidetracked by questions around his leadership and judgment in the wake of revelations he wore blackface make-up on multiple occasions as a younger man.

Support for the Liberals has remained steady throughout the campaign, hovering between 33 per cent and 34 per cent, according to a aggregate polling averages compiled by the Canadian Broadcasting Corp. That puts them in a tie with the Conservartives heading into a crucial leaders’ debate Monday night.

Trudeau has also had the benefit of stabilizing consumer confidence numbers in recent weeks, as heightened concerns about the global economic outlook that were prevalent in August fade. The Bloomberg Nanos Canadian Confidence Index -- a composite indicator derived from phone surveys of households -- hit 58.2 last week, the highest since the end of July. The pick up is due to growing optimism for the economy and for housing prices.

Trust in Trudeau to manage the economy is highest in Atlantic Canada, Ontario and Quebec. The Canadian prime minister is most trusted on growth among older Canadians and women. Scheer scores higher in the energy-rich prairies and is statistically tied with Trudeau among men.

The economic stewardship telephone poll of 1,013 Canadians was conducted between September 26 and September 30 and is considered accurate within 3.1 percentage points.