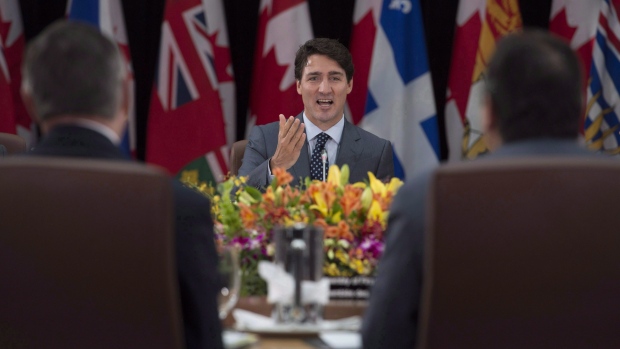 Prime Minister Justin Trudeau says he is talking to premiers regularly about the need to get a western pipeline expansion built but stopped short of agreeing to intervene in an emerging trade war between British Columbia and Alberta. , The Canadian Press

OTTAWA -- Just because Prime Minister Justin Trudeau is refusing to wade publicly into the emerging pipeline-induced trade war between British Columbia and Alberta, that doesn't mean things aren't happening out of the public eye, his environment minister suggested Wednesday.

Maybe so -- but when it comes to the Trans Mountain pipeline dispute, the no-drama ship has officially sailed.

B.C. threw down the gloves last week when it proposed a regulation to restrict expanded flows of oil through the province without a guarantee spills can be cleaned up -- a measure that would effectively halt, if not kill outright, the plan approved by Ottawa in 2016 to triple existing pipeline capacity between Alberta and B.C.

Politically, Notley needs the pipeline built to have any hope of re-election next year; B.C. Premier John Horgan campaigned on a promise to kill it off. His minority government's tenuous grip on power depends on keeping the Green party happy -- which means Horgan can't back down.

Trudeau and the Liberals haven't shown any evidence they've done anything to urge the project along, said Conservative Leader Andrew Scheer. The government said it would not tolerate undue delays, but no one knows what that means or what the government is prepared to do, he noted.

The Alberta Government will continue to defend Alberta jobs, Canadian jobs, & Ottawa needs to do the same: It doesn’t have to be this way. We can act as one country, with one national economy, with one national climate plan and with one common future. It’s time for Ottawa to act. pic.twitter.com/kyVZEQsrxf

Canada's constitution gives Ottawa jurisdiction over interprovincial infrastructure like pipelines, so the federal government has the authority to move things along, said Scheer -- but it looks as if Trudeau doesn't actually want that to happen.

"The problem that we have in this context is that a certain period of delay causes uncertainty which causes these projects to get cancelled," Scheer said. "I suspect that's exactly what Justin Trudeau wants. He wants this project to fail and he is allowing the B.C. NDP to do it for him."

Trudeau and members of his cabinet have said repeatedly they approved Trans Mountain, they still believe in it and that it will get built.

What's unclear is precisely how the government plans to make that happen.

"We're continuing to discuss and engage with the B.C. government, with the Alberta government," the prime minister said Wednesday before his weekly caucus meeting. "We're making sure we come to the right place that's in the national interest for Canada.

"We're going to continue to engage with the premiers on a regular basis."

Kinder Morgan had to ask the National Energy Board to intervene when the city of Burnaby refused to give permits to start construction on the pipeline and the marine terminal where it ends. The board had to override Burnaby's jurisdiction to grant the permits, saying it was withholding them incorrectly.

Kinder Morgan is also awaiting approval on its final route for the pipeline expansion before it can begin construction. Initially, Kinder Morgan hoped the $7.4-billion expansion would be up and running by the end of 2019; last month it revised that to December 2020.

The dispute comes just as the federal government prepares to unveil a long-promised overhaul of the environmental assessment process.

After two years of consultations, focus groups, expert panels and discussion papers, McKenna and an army of other cabinet ministers will fan out across the country Thursday to promote the legislation, which is expected to create a single assessment system for all projects.

The hope is to provide clarity for investors and project proponents to know exactly what they'll have to do to get a project approved and how long it will take.

There will be no surprises in the legislation, McKenna said.

NDP Leader Jagmeet Singh, meanwhile, said the fight over Trans Mountain would not be happening if the Liberals had delivered earlier on their long-promised overhaul.

The coming changes help illustrate the difficulty the Liberals have had trying to claim middle ground on the environment and the economy, said Conservative natural resources critic Shannon Stubbs.

During question period this week, Carr defended the decision to build Trans Mountain based on a sound review process, followed a few minutes later by McKenna "eviscerating the process" before she introduces the overhaul legislation, she noted.

"Is it any wonder then their defence of the issue is lukewarm?"