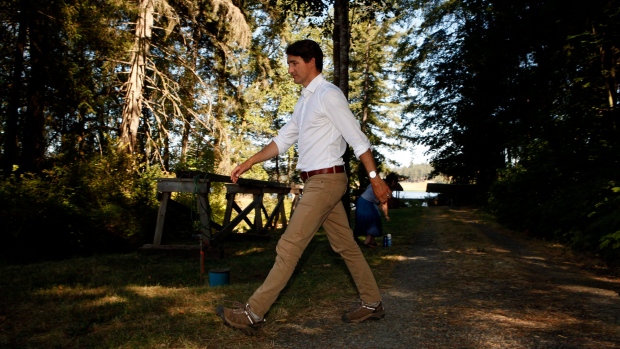 DUNCAN, B.C. — Justin Trudeau mingled with hundreds of friendly people at two family-focused events on Vancouver Island, but the prime minister was also reminded of the strong opposition his government faces over the Trans Mountain pipeline expansion project.

At an outdoor news conference Saturday at the Forest Discovery Centre in Duncan, B.C., Trudeau acknowledged there are people opposed to the government's decision to buy the pipeline from Kinder Morgan. However, he said, it won't stop the project or Liberal plans to fight climate change.

In May, Trudeau's Liberal government announced its decision to buy the Trans Mountain pipeline from Alberta to the B.C. coast and related infrastructure for $4.5 billion. It could also spend billions more to build the controversial expansion.

"We know we have to put in place a strong plan to fight climate change," said Trudeau. "There are people on the other side of the political spectrum who don't like that."

The prime minister shook a lot of hands and posed for countless selfies, but some placard carrying protesters at the gates of the forestry centre let him know the pipeline issue will continue to dog him, with one even calling him an "oil pimp."

Trudeau also made comments about North Korea, reacting to reports from the United Nations that the country has made few moves to halt its nuclear weapons program.

"We must see a denuclearized North Korea," he told reporters. "North Korea continues to be a concern, not just for regional security but global stability. We need to continue to put pressure on the North Korean regime."

Earlier in the day, Trudeau made a surprise visit to the Duncan Farmers' Market, which quickly attracted a crowd of people around him, with many posing for selfies.

The local band playing at the market stopped its regular set and played "O Canada," with Trudeau later singing with the crowd.