Prime Minister Justin Trudeau said he doesn’t believe monetary policy will be a top priority for his government after the Sept. 20 election, prompting criticism from his Conservative rivals.

At a campaign stop in Vancouver, Trudeau was asked whether he would support altering the Bank of Canada’s inflation-fighting mandate to allow it to tolerate somewhat higher prices, as the U.S. Federal Reserve has done. The central bank tries to keep inflation close to 2 per cent, and its target comes up for review every five years.

Justin Trudeau speaks at an Ottawa news conference Sunday after calling a snap election for Sept. 20.

The next renewal is due later this year, but Trudeau indicated it was not a major preoccupation for him.

“When I think about the biggest, most important economic policy this government, if re-elected, would move forward, you’ll forgive me if I don’t think about monetary policy,” Trudeau said at the Wednesday press conference. “You’ll understand that I think about families.”

The comments came on the same day Statistics Canada said inflation hit 3.7 per cent in July, one of its highest readings over the past two decades and the fourth straight month outside the central bank’s 1 per cent to 3 per cent control range.

“The simple fact is that Justin Trudeau has made life less affordable for Canadians,” Conservative Leader Erin O’Toole said in a statement. “Regular Canadians are struggling to make ends meet.” 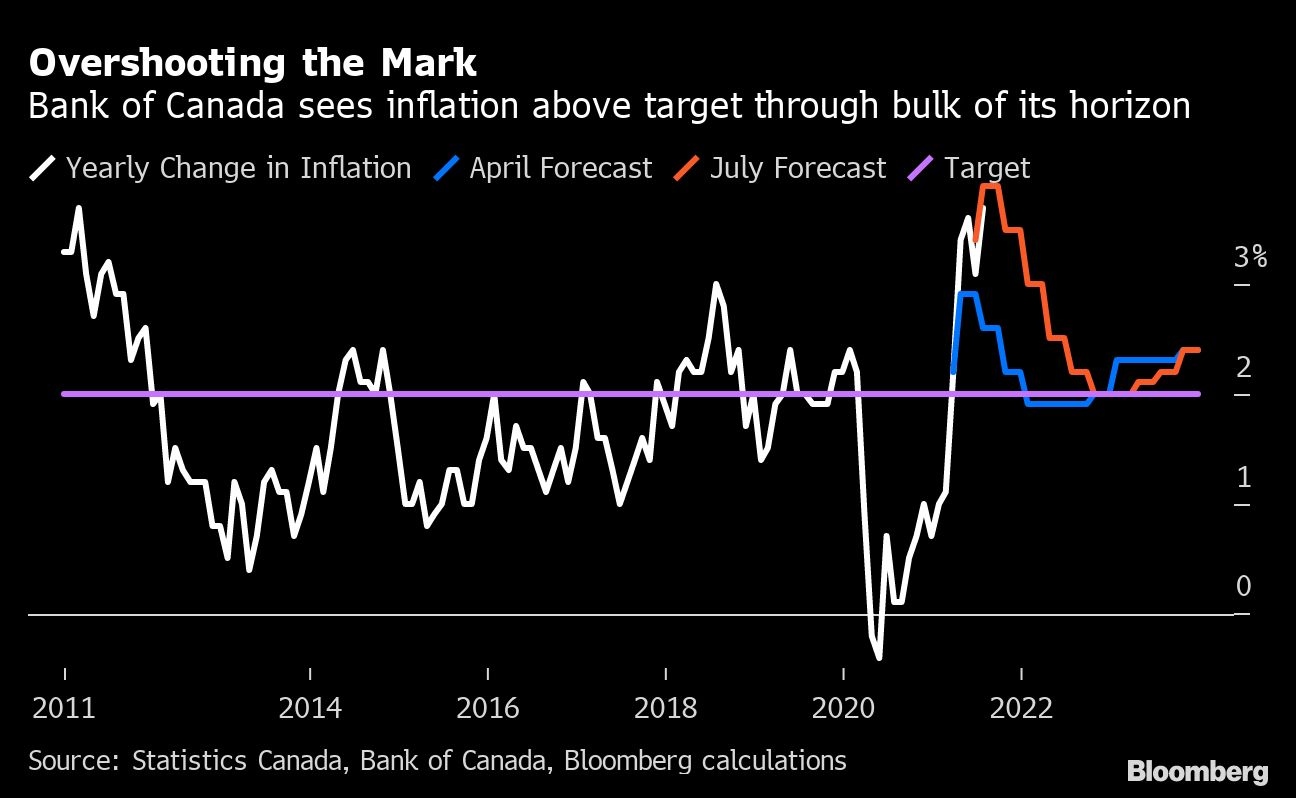 Bank of Canada Governor Tiff Macklem has warned against overreacting to the “temporary” spike in prices. But if he’s wrong about the transitory nature of the price increases, the central bank could be forced to hike interest rates earlier than analysts are anticipating -- unless the government provides a fresh mandate that grants it more flexibility.

When asked about July inflation reading, Trudeau said: “We fully respect the Bank of Canada’s role in setting monetary policy so we won’t comment directly on that.”

The central bank’s existing mandate requires it to keep inflation within its control range as much as possible. Operationally, that has meant aiming for a 2 per cent target over the central bank’s forecast horizon, a period of about two years.

The Bank of Canada’s purchase of hundreds of billions of federal government bonds since the start of the pandemic has helped keep the government’s borrowing costs in check as it ran record budget deficits.

The 5 year mandate expires this year. So it's something the govt should be thinking about

Macklem has also faced Conservative criticism on the issue, with one of O’Toole’s chief spokespeople on economic issues saying the central bank “should not be an ATM for Trudeau’s insatiable spending appetites.”

Asked about how an O’Toole government would approach the Bank of Canada at a campaign event in Quebec City earlier Wednesday, the Conservative leader declined to comment directly. He instead highlighted his proposal for a one-month holiday on federal sales tax for certain purchases.