Prime Minister Justin Trudeau is overhauling Canada’s drug-pricing regime for the first time in more than 30 years, a move that could cost drugmakers billions in sales and raise the stakes in a U.S. debate over prescription costs.

Trudeau, who is trying to fend off a conservative challenger in an election in October, has pushed through new regulations to drop the U.S. from a basket of countries Canada uses to cap domestic drug prices. The move is part of a wider revamp that marks “the biggest step to lower drug prices in a generation,” said Health Minister Ginette Petitpas Taylor.

The U.S. pays more on average for prescription drugs than any other developed nation. President Donald Trump has proposed aligning U.S. pharmaceutical costs more closely with prices in Canada and other large countries, and has cleared a path for patients to buy cheaper medicines from the U.S.’s northern neighbor -- an idea many Canadians oppose.

Health care is expected to be an important issue for Canadian voters when they head to the polls. Half of Canadians rate health care as one of their top three concerns, according to a June Ipsos poll.

Canada is the only country with universal health care that doesn’t cover prescription drugs. Though it does limit prices, patients there pay top dollar for brand-name medicines -- per capita, only the U.S., Switzerland, and Germany spend more. Roughly one in 10 Canadians don’t fill their prescriptions because they can’t afford to, according to a government advisory panel.

A group of five drug companies are challenging Trudeau’s policy changes in court. Industry groups said the government’s plans could make it harder for Canadians to access innovative new therapies. 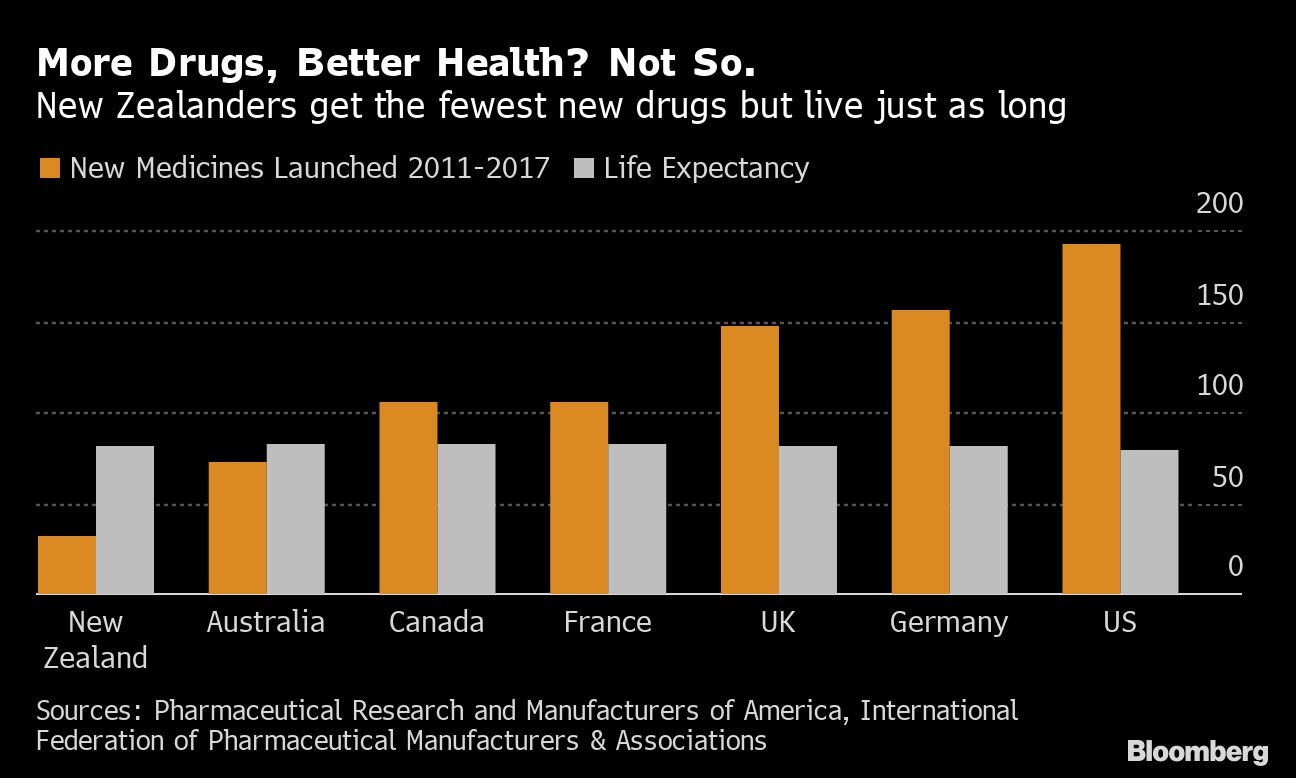 Starting in July 2020, the U.S. and Switzerland will be dropped from a basket of countries referenced to limit domestic prices of patented medicines. Drugmakers would also have to reveal more pricing data to regulators. Currently, the board sees only sticker prices, which are often higher than confidential rates struck with insurers.

On average, the cost of high-priority medicines -- those with few alternatives or which provide a substantial benefit to existing treatments -- is expected to drop 40% under the new rules. Over 10 years, the industry would suffer C$8.8 billion ($6.6 billion) in reduced revenue, the government estimates. Johnson & Johnson, Novartis AG and Merck & Co. are the biggest sellers of pharmaceuticals in Canada, accounting for a fifth of the market, according to government data.

The effects of lower prices in Canada could spill over into the U.S., drugmakers’ most important market. The Trump administration last month announced a plan to import cheaper drugs from Canada. It’s also proposed reducing what Medicare pays for some expensive drugs by aligning prices with those in other countries, including Canada -- a move it estimates could save $17.2 billion over five years.

“If that went through, absolutely, what Canada succeeds in negotiating with the pharmaceutical industry could potentially alter prices in the U.S.,” said Eric Schneider, senior vice president for policy and research at the Commonwealth Fund, an independent health-care research group. “But it’s a funny way of trying to re-import cost-effectiveness analysis into the U.S.”

The changes “will slow and limit Canadians’ access to new breakthrough medicines,” the companies said in nearly identical statements on Aug. 23. “Our fear is that patients will be worse off,” said Pamela Fralick, president of Innovative Medicines Canada, the industry group representing some of the world’s biggest drugmakers.

Drugmakers frequently warn that lower prices could choke investment and limit access to the most advanced therapies. Last month, an industry-funded study in New Zealand, which has some of the lowest drug prices in the world, ranked the country last among developed nations in access to new medicines.

But there’s little to indicate that a market awash in new drugs leads to better overall health outcomes.

“A simple count of medicines won’t tell you how effective a health system is,” said Sarah Fitt, head of New Zealand’s public drug-buying agency. For most cancers, five-year survival rates for New Zealanders are among the highest in the world; overall, cancer patients there live two years longer than the developed-world average, she said.

“If you can’t afford the drug, it’s like the drug wasn’t invented for you,” she says.