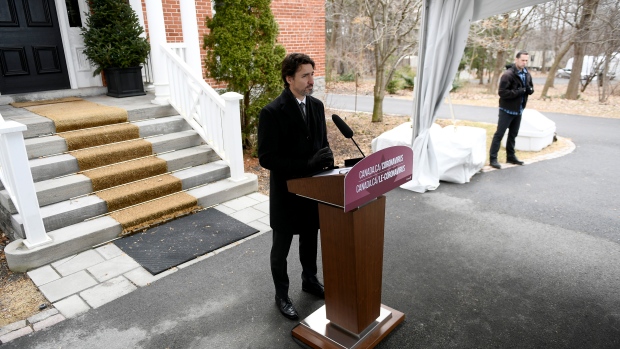 Prime Minister Justin Trudeau speaks during his daily press conference on the COVID-19 pandemic outside of his residence at Rideau Cottage in Ottawa, on Friday, April 10, 2020. , THE CANADIAN PRESS/Justin Tang

Canada may be able to loosen lockdowns and have some sectors return to work by the summer if the nation abides by the tight restrictions currently in place, Prime Minister Justin Trudeau said.

The country is currently in the “first and worst phase” of the coronavirus, and modeling shows that in a best-case scenario it could emerge relatively quickly if people observe social distancing so as to minimize the burden on the health system, Trudeau said at a press conference Friday.

“That is the ideal scenario but it only happens if we continue to stay strong for the coming weeks,” he said.

By that point, Canada will have better testing protocols and new technologies to trace outbreaks allowing it to respond to any resurgencies more capably, he said.

On Friday, Canada’s national police service said it will begin conducting spot checks to verify that people under mandatory quarantine, including travelers who’ve entered from abroad, are staying in their homes, according to a statement. Under Canada’s Quarantine Act, those who violate such orders can face a maximum fine of $750,000 and six months imprisonment.

Canada is continuing to ramp up its testing capacity, Trudeau said. In a separate briefing Friday, Chief Public Health Officer Dr. Theresa Tam said that the nation has tested more than 380,000 people and 5 per cent have tested positive. It has tested more people per capita than the United States.

“The lead that we’ve taken on testing is part of why we are seeing a flatter curve than other places,” Trudeau said in Ottawa.

Still, Trudeau tempered expectations: “We will not get back to the normal that we had before at least until we have developed a vaccine for the virus -- that is the reality.” A vaccine could take anywhere from 6 months to a year and a half, he said.