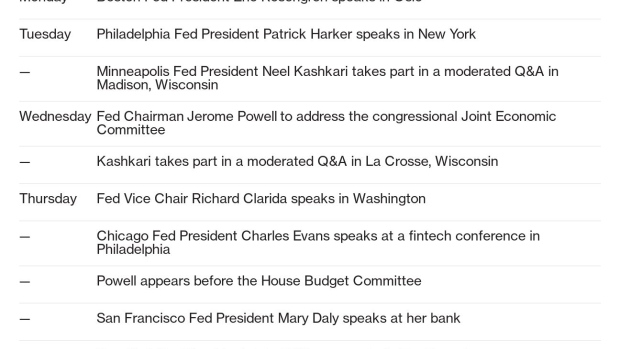 (Bloomberg) -- The two biggest players in the U.S. economy will take the stage this week, as President Donald Trump and Federal Reserve Chairman Jerome Powell speak amid signs the nation’s trade war with China may be thawing.

Trump will deliver a speech at the Economic Club of New York on Tuesday, with investors hoping he sheds light on a planned initial deal with China. Any comments on trade from the president could prove key to Powell’s outlook when he testifies before lawmakers in Washington on Wednesday and Thursday -- his first major appearances since the U.S. central bank cut rates last month and signaled its easing plans were now on hold.

“While the current warming trend on the trade front and favorable market response may be mitigating the need for a December rate cut, we continue to expect a need for further accommodation -- simply executed at a slightly later date. Powell will have the opportunity to reiterate such a message this week.”--Carl Riccadonna and Yelena Shulyatyeva, Bloomberg Economics

Elsewhere, economic data will help show how much of a shadow the trade war has cast over the rest of the world. A report from Germany will show whether the euro area’s biggest economy entered a recession in the third quarter, while the U.K. and Japan are also due to release their latest growth figures.

Here’s what happened last week and below is our weekly wrap of what’s going on in the world economy in the coming days:

The U.S. and Canada

While the U.S. bond market’s week may be shortened by the Veterans Day holiday, Fed officials are still out in force. Including Powell, nine policy makers are due to speak this week, with Thursday alone seeing six appearances. In terms of data, the U.S. is due to report its latest inflation figures on Wednesday, while Friday sees reports on retail sales and industrial production.

The statistical verdict on whether Germany, the region’s biggest economy, entered a recession during the third quarter will be released on Thursday. While the country’s industrial weakness has been the key feature of the European slowdown this year, recent improvements in economic data make the outcome likely to be touch-and-go.

Meanwhile in the U.K., formal growth data on Monday look likely to confirm the nation avoided a recession of its own after the previous quarter’s 0.2% contraction. Still, the persistent threat of a disruptive Brexit is likely to be a distorting factor in that outcome, and Bank of England officials indicated last week that more uncertainty, or worsening global picture, could prompt them to act to support the economy.

One central bank that is already in easing mode in Egypt’s, which on Thursday is expected to reduce its benchmark interest rate for a fourth time this year, seizing on slower inflation and the world’s best-performing currency, up 8.8% against the dollar this year. The same day, the finance ministers of Ghana and Zimbabwe will present their 2020 budgets.

Japan will report its own third-quarter growth figures on Thursday, with economists expecting a slight slowdown from the previous three months.

Central banks in New Zealand and the Philippines meet to set interest rates. Economists are so far split on what they expect the RBNZ will do on Wednesday, although the majority predicts a rate cut, while the Philippine central bank chief appears done with easing for now, with Governor Benjamin Diokno saying in a recent text message that monetary authorities have done “more than enough” for the year. That decision will come on Thursday.

Finally, numbers on wages and unemployment from Australia will be key for the interest-rate outlook Down Under as economists continue to speculate if and when the central bank there will need to adopt unorthodox policies such as quantitative easing.

Mexico’s central bank is expected to cut interest rates for a third straight meeting on Thursday as inflation is near its 3% target and the economy has stalled.

In Brazil, attention to activity indicators are increasing after the central bank indicated it will reassess its monetary easing cycle after one additional interest rate cut. On Wednesday, retail sales data for September might shed some light on the impact of lower rates on consumption.

Meanwhile, on Friday, Argentina’s inflation data for October will show prices rises at a pace of more than 50% a year in a challenge for President-elect Alberto Fernandez.

To contact the editors responsible for this story: Simon Kennedy at skennedy4@bloomberg.net, Zoe Schneeweiss, Scott Lanman