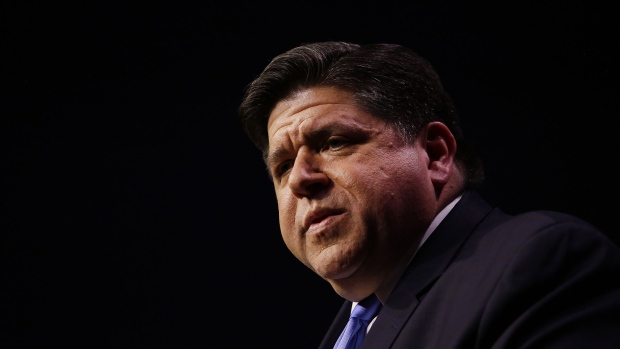 Bailey, a Bible-quoting farmer from downstate, won the Republican primary with 57% of the votes as of 11 p.m. New York time Tuesday, according to the Associated Press. Richard Irvin, the mayor of the state’s second-largest city who was seen as an early front-runner because his campaign received $50 million from billionaire Ken Griffin, garnered about 16% of the vote in the primary. Jesse Sullivan, one of the other four Republicans in the gubernatorial primary, also got 16%.

Griffin -- the richest man in Illinois, with a net worth of more than $28 billion -- is regularly a top donor to Republican candidates nationally, but has had an outsized impact in Illinois over the last two decades. Since 2002, he’s contributed more than $174 million to candidates and causes in Illinois, with $100 million of that since 2020, according to campaign-finance records.

But it was the campaign spending focused on drawing attention to Bailey’s positions that raised eyebrows in Illinois.

Democrats in the state helped spread the word about Bailey’s Trump-aligned positions with the party’s governors association spending $9.8 million on television ads calling him pro-gun, pro-life and an acolyte of the former president, according to AdImpact, which tracks political commercials.

It was a bit of political cunning by the Democrats, who actually wanted Republicans to pick Bailey for Pritzker’s opponent -- and wanted to make sure those conservative Republican primary voters knew he was a staunch conservative backed by Trump. Democrats appear to believe Pritzker’s path to re-election is smoother running against the more conservative Bailey.

Nationally, Democrats have sought to essentially keep Trump on the ballot since he left office and tether Republican candidates to him as a way to draw contrasts for voters. In 2020, President Joe Biden took Illinois by nearly 17 percentage points and Trump lost the state to Hillary Clinton by a similar margin in 2016.

“There’s just a lot of money being spent by the Democrats calling Darren Bailey a conservative to conservatives,” said Mark Batinick, a Republican Illinois state representative who is not seeking re-election and has received such fliers to his home.“They want him to be the nominee because they think he’s the easiest to beat. They are basically advertising Darren Bailey to Republican voters.”

Meanwhile, Republicans are trying to regain a foothold in a state that has elected a mix of GOP and Democratic governors. The party doesn’t have a firm grip on Chicago’s suburbs like it once did and whether Bailey can gain enough downstate and suburban voters is a concern.

The race showcased a struggle playing out between the moderate wing of the Republican party that wants to put a candidate on the ballot in November who can beat Pritzker, and Trump supporters seeking a nominee who ignites the former president’s base.

“J.B. Pritzker won the Republican Primary for Governor here in Illinois,” Irvin said on Tuesday when he conceded to Bailey. “He spent a historic amount of money to choose his own Republican opponent.”

Low voter turnout in a primary that was about two months later than normal in Illinois may have also contributed to the most ardent supporters of Bailey voting in the primary.

“It’s resonating with a minority of the minority party,” Batinick said.

Bailey is the lead Republican on the Senate Agriculture Committee and previously served in the Illinois House of Representatives. He opposed Pritzker’s pandemic mitigations over the last two years.

While Pritzker has presided over a period when Illinois’s fiscal outlook has improved, he’s been criticized for rising crime and most recently the announced headquarters departures of well-known, large companies including Boeing Co., Caterpillar Inc. and Citadel, Griffin’s hedge fund.

“I am J.B. Pritzker and I am going to beat Donald Trump’s candidate for Governor, Darren Bailey,” Pritzker said Tuesday after winning the Democratic nomination.

Batinick said he was an early backer of Irvin because the Black mayor cut taxes and took steps to curb crime that resonated with Republicans.

Given multiple billionaires were involved, the contest may also have seen a diminishing return on the money spent as voters became saturated with ads and messaging, said Alisa Kaplan, the executive director of Reform for Illinois, a money in politics watchdog group.

While Irvin had Griffin on his side, there were two billionaires on the opposite sides, Kaplan said. Billionaire Richard Uihlein, a long-time Trump supporter committed about $9 million to Bailey’s campaign and Pritzker, a billionaire scion of the Hyatt hotel fortune, has spent tens of millions of his own money to fund his campaign and support Democrats.