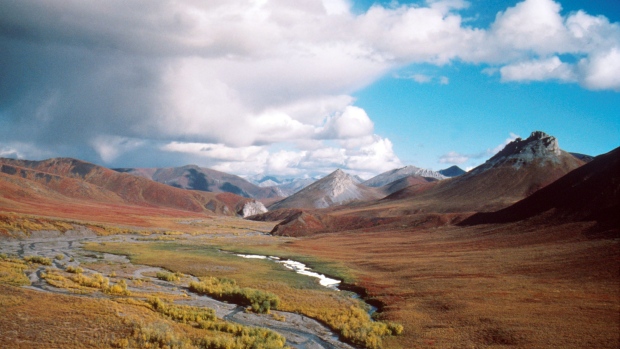 392886 20: (FILE PHOTO) This undated photo shows the Arctic National Wildlife Refuge in Alaska. The Bush administration''s controversial plan to open the refuge to oil drilling was approved by the House of Representatives on August 2, 2001, but it faces a tough battle in the Senate. (Photo by U.S. Fish and Wildlife Service/Getty Images) Photographer: Getty Images/Getty Images North America , Getty Images

(Bloomberg) -- The Trump administration on Monday authorized a sweeping plan to sell drilling rights and spur oil development in Alaska’s rugged Arctic refuge, setting up a possible auction by the end of 2020 and a political clash if the president loses the November election.

The Interior Department’s decision approves oil leasing across the Arctic National Wildlife Refuge’s entire 1.56-million-acre coastal plain -- an area the size of Delaware that’s home to polar bears and caribou. Though Congress earmarked the area for possible energy development in 1980, it has remained off-limits to oil drilling for decades.

“The establishment of this program is a major milestone,” Interior Secretary David Bernhardt said in an interview. “It’s not the end of the leasing process, but it is a very, very significant milestone.”

The decision sets the stage for the federal government to auction Arctic drilling rights in the final quarter of 2020 -- and a potential confrontation next year if President Donald Trump doesn’t win re-election. Democratic nominee Joe Biden said he’s “totally opposed” to drilling in the Arctic refuge, having called the idea a “big disaster” in a February town hall meeting.

Congress mandated an Arctic oil and gas program three years ago, with a law requiring Interior to sell drilling rights and facilitate development in the coastal plain. Under the 2017 Republican tax law, the Interior Department must hold at least one auction of coastal plain oil leases before Dec. 22, 2021 and another by Dec. 22, 2024. Congress also required Interior to issue rights-of-way and easements necessary to support oil exploration and production.

The record of decision Interior is issuing Monday is anchored by those congressional mandates, which Bernhardt said provide “far greater assurances to potential leaseholders” that they will have the ability to access, explore and develop operations.

The approach is meant to help buttress Trump’s Arctic oil plans that environmentalists have vowed to challenge in court, while making it harder for a future administration to reverse course.

“The record of decision is very strong and I think it will be a very durable program,” Bernhardt said. “The law as currently drafted says ‘thou shall act in a particular time frame irrespective of who is in the executive branch.’”

Environmentalists argue Arctic oil development imperils one of the world’s last truly wild places -- a rugged wilderness in northeast Alaska populated by Arctic foxes, polar bears, caribou herds and more than 200 species of birds. Canada has repeatedly warned about the potential for harm to the Porcupine caribou herd that forages and calves in the area.

The Interior Department has acknowledged that its plans would affect large portions of critical habitat and denning areas for polar bears, including a dwindling Southern Beaufort Sea population. “The potential for injury or mortality could be high when developing new oil and gas projects in polar bear habitat,” Interior’s Bureau of Land Management said in an environmental analysis last year.

With its Monday decision, the Interior Department rejected narrower alternatives that would put less acreage up for grabs and impose more restrictions. The agency is establishing buffer zones around polar bear dens and timing limitations on activity during Porcupine caribou calving season, but conservationists have said the planned safeguards are inadequate.

The Interior Department still must issue a formal “call for nominations” seeking input on specific tracts and take public comment before scheduling a sale.

Under the approved plan, surface activity will be off-limits in 23% of the 1.56 million acres (632,726 hectares) available for oil leasing. Timing limitations will be imposed on 37% of the area to help protect habitat and wildlife. Further site-specific limitations could be embedded in leases and future permits, Bernhardt said.

The Arctic refuge has long beckoned energy companies with the potential for discoveries that could produce oil for decades, rivaling output even from the mammoth Prudhoe Bay field nearby. The U.S. Geological Survey has estimated the refuge’s coastal plain might hold between 4.3 billion and 11.8 billion barrels of technically recoverable crude.

Yet it’s not clear how many oil companies will be eager to look for it now. Relatively few companies have the resources to mount costly operations in the remote region, and major U.S. banks have sworn off financing Arctic oil projects in response to environmental pressure.

Some potential bidders, such as Oil Search Ltd., have recently pared operations as low crude prices and an epic downturn in fuel demand from the coronavirus spur companies to idle drilling rigs, shed staff and curtail new spending across the U.S.

“Industry interest for the Arctic refuge is particularly hard to predict” as many companies have kept quiet, observed the progressive Center for American Progress, which opposes the administration’s plan. “They must weigh, among other things, the huge expense and risk of new development in the Arctic; the certainty of costly and protracted litigation; and the uncertainty of whether there are any oil and gas resources.”

Conservationists have vowed court challenges at every milestone on the long path to drilling. A future president who opposes Arctic drilling could slow-walk selling leases or permitting wells in the coastal plain. While that resistance could in turn be challenged, the ensuing litigation might span years.