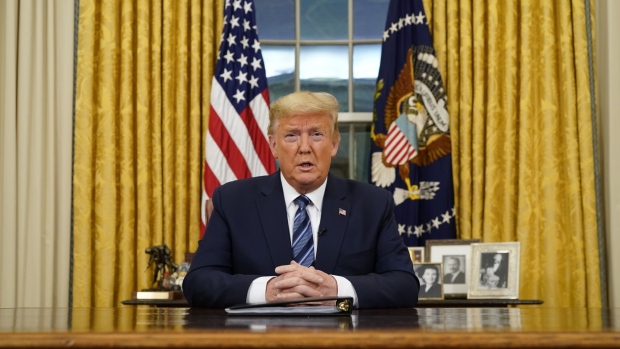 President Donald Trump declared a national emergency on Friday over the coronavirus outbreak, invoking the Stafford Act to open the door to more federal aid for states and municipalities.

“I’m urging every state to open emergency operations centers,” Trump said at a press conference in the Rose Garden.

The declaration allows the government to marshal additional resources to combat the virus. It also marks a symbolic turning point for the president, who has repeatedly compared the coronavirus to the seasonal flu and insisted that his administration had the outbreak under control.

As Trump’s press conference continued, U.S. stocks extended gains. The S&P 500 climbed about 5 per cent in late afternoon trading, providing some respite after stocks’ worst day since 1987 earlier this week.

Trump said he was also conferring new authority to Health and Human Services Secretary Alex Azar, enabling him to waive regulations and parts of laws -- such as hospital stay limits -- to give hospitals and health care providers maximum flexibility.

The president also addressed widespread criticism that the government has fumbled the distribution of test kits, announcing what he called a new partnership with the private sector to test for coronavirus.

“We want to make sure those who need a test can get a test,” Trump said. He estimated 5 million tests would be available within a month, but said he doubted so many would be needed. He encouraged people who weren’t showing symptoms to refrain from seeking a test.

Part of the partnership Trump announced was done in collaboration with Alphabet Inc.’s Google, which will help direct potentially infected people to drive-through test sites at locations including Walmart and Target parking lots.

Senate Democrats had urged Trump to invoke the Stafford Act and other disaster declaration requests they say would free up more than US$42 billion in funding for states available in the Disaster Relief Fund. Trump said the measure would open access to as much as US$50 billion.

An emergency declaration would allow a state to request a 75 per cent federal cost-share for expenses that include emergency workers, medical tests, medical supplies, vaccinations, security for medical facilities, and more, according to a letter Democrats sent the president earlier this week.

Only a few emergency declarations for public health threats have been made since the 1960s, and only two have targeted disease outbreaks, when President Bill Clinton in 2000 declared emergencies in New York and New Jersey in response to the West Nile Virus.