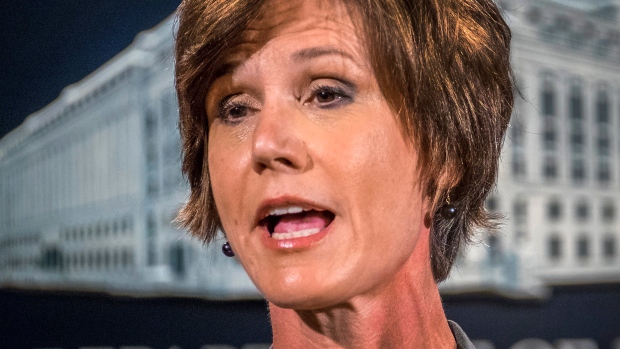 It was another dramatic twist in the unusually raucous roll-out of Trump's directive that put a 120-day hold on allowing refugees into the country, an indefinite ban on refugees from Syria and a 90-day bar on citizens from Iran, Iraq, Libya, Somalia, Sudan, Syria and Yemen.

The Friday night ban prompted protests and chaos at airports on the weekend as customs officials struggled to put the order into practise, and the fallout spread to U.S. markets on Monday, where stocks suffered their biggest drop of 2017 and companies affected by the change spoke out against it.

Yates said late on Monday that the Justice Department would not defend the order against court challenges, saying that she did not believe it would be "consistent with this institution's solemn obligation to always seek justice and stand for what is right."

Hours later, she was fired. The White House said Yates "has betrayed the Department of Justice by refusing to enforce a legal order designed to protect the citizens of the United States" and portrayed her actions as political.

Trump has argued tougher vetting of immigrants is needed to protect America from terror attacks but critics complain that his order unfairly singles out Muslims and defiles America's historic reputation as a welcoming place for immigrants.

Yates, an appointee of former Democratic President Barack Obama, was days away from being replaced by Trump's pick for the top spot at the Justice Department, Republican Senator Jeff Sessions, who is awaiting Senate confirmation.

"Ms. Yates is an Obama Administration appointee who is weak on borders and very weak on illegal immigration," the White House said in a statement.

The White House said that Dana Boente, U.S. Attorney for the Eastern District of Virginia, was sworn in at 9 p.m. ET and would be acting U.S. attorney general until Sessions is approved.

Boente said in an interview with the Washington Post that he would enforce the immigration order.

There have been only a handful of instances in U.S. history of top Justice Department officials publicly breaking with the White House.

The most famous example was in 1973, when then-Attorney General Elliot Richardson and his deputy resigned rather than obey President Richard Nixon's order to fire a special prosecutor investigating the Watergate scandal.

The incident, which became known as the "Saturday Night Massacre," was a public relations disaster and is seen as a turning point in Nixon's administration.

The drama at the Justice Department is another sign of how hastily Trump's immigration order was developed and how little it was reviewed by the agencies now grappling to implement it.

The White House said key government officials were briefed before Trump signed the order on Friday, but there was little coordination or consultation, resulting in confusion. Most State Department officials found out about it from media reports.

White House spokesman Sean Spicer dismissed the memo. "These career bureaucrats have a problem with it? I think that they should either get with the program or they can go," he told reporters at his daily briefing.

An internal Department of Homeland Security document seen by Reuters showed 348 visa holders were kept from boarding U.S.-bound flights this week, and more than 200 people came to the United States but were denied entry.

More than 735 people were pulled aside for questioning by U.S. Customs and Border Protection officers at airports, including 394 green card holders, who are legal permanent residents of the United States, the document said.

Trump's administration is granting waivers from the refugee ban to allow 872 people into the country this week - refugees that had already been cleared for resettlement in the United States and were in transit when the order came out.

Tens of thousands of people protested Trump's order in major American cities and at airports on the weekend.

Obama took the rare step of weighing in, saying through a spokesman that he was heartened by the political activism on the issue.

Employees of Alphabet Inc's Google in San Francisco, Mountain View, Seattle and other cities held protests. Backed by a sign that said "We are a nation of immigrants," Sergei Brin, president of Alphabet, said he was outraged by the order.

"The U.S. had the courage to take me and my family in as refugees," he said in a YouTube video of his remarks.

Federal judges blocked deportation of those detained under the order through the weekend, and more lawsuits were filed on Monday.

The Council on American-Islamic Relations, the country's biggest Muslim advocacy group, filed a federal lawsuit on behalf of more than 20 people.

Washington state filed a lawsuit, arguing that Trump's order violates the equal protection clause and the First Amendment of the U.S. Constitution. Several other Democratic state attorneys general have said they are considering legal action.

"It is an insult and a danger to all of the people of the state of Washington, of all faiths," Washington state Governor Jay Inslee, a Democrat, told reporters.

Amazon.com Inc and Expedia Inc, both of which are based in Washington state's Seattle area, are supporting the state's suit.

Amazon scrapped a business trip for a senior company lawyer who was born in Libya but has U.K. citizenship, according to a declaration filed in support of the lawsuit. Forty-nine of its employees were born in one of the banned countries, and seven new hires may need to be placed in offices outside the United States, it said.

A declaration from Expedia said the order could impact the travel itineraries of at least 1,000 customers, costing it refunds as well as expenses to monitor how the order is applied and who exactly is affected.

The U.S. technology industry, a major employer of foreign workers, has been the most vocal corporate opponent to Trump's order. A group of top companies plans to meet on Tuesday to discuss how best to support legal challenges.