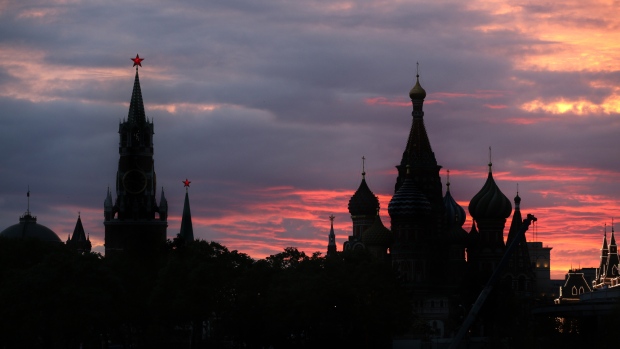 The Spasskaya tower, left, and St. Basil's cathedral, right, stand silhouetted in Moscow, Russia, on Wednesday, July 5, 2017. U.S. officials, including Brett McGurk, the U.S. envoy for the coalition to fight the Islamic State, have been quietly meeting with Russian counterparts for weeks to lay the groundwork for cooperation. , Bloomberg

(Bloomberg) -- President Donald Trump’s company considered offering Russian President Vladimir Putin a $50 million penthouse in a planned skyscraper in Moscow to make the building more desirable to rich buyers, according to the Russian-born real estate developer who was broker on the project.

Felix Sater, a felon, ex-government informant and former Trump business associate, said Thursday he came up with the idea as a way to reap extra profit from Trump Tower Moscow, which he said would have brought in as much as $500 million if it had been built. Then-Trump lawyer Michael Cohen approved of the idea, Sater said, adding that it came to him while "spitballing" marketing schemes.

It wasn’t clear how seriously the idea was ever pursued, or whether Trump knew about it.

The Moscow tower deal was scrapped in 2016, though the reasons remain unclear. The disclosure about the penthouse proposal was first reported by Buzzfeed News, which claimed the idea was pitched during the 2016 presidential campaign.

"I proposed giving Putin a $50 million penthouse because all of the oligarchs would kill to live in the building, and we could raise prices by an extra $250 million," said Sater, who worked as an adviser to Trump’s company during the Moscow negotiations and had previously worked with Trump to develop to a building in Manhattan.

Trump’s business dealings in Moscow took center stage earlier Thursday when Cohen pleaded guilty to lying to Congress about the Trump tower Moscow project in an August 2017 statement to Congress. Cohen admitted he lied when he said that negotiations for the skyscraper ended in January 2016 when in fact they continued until June that year, after Trump cinched the Republican nomination.

Cohen said he made the false statements to minimize links between Trump and the Moscow project and to give the impression that the deal had fallen apart before the first primary, "in the hopes of limiting the ongoing Russia investigations," according to court papers. He also acknowledged working with "Individual 2" -- Sater, according to a person familiar with the matter -- in trying to win Russian approval for the project, according to court papers.

Cohen has agreed to cooperate with Special Counsel Robert Mueller’s investigation into Russian interference in the 2016 election. As part of his plea deal, he admitted he talked to Trump about the Moscow deal more times than he had previously stated and also briefed Trump family members.

Sater said giving big-name celebrities free units in new buildings is "a standard marketing trick in real estate." He said he tried a similar marketing trick in the mid-2000s, while working on a residential project in Montenegro, when Madonna was to perform at a concert.

He said he tried to give Madonna a free unit, thinking that if potential buyers heard Madonna may live there "everyone would want to live there." It didn’t work, but he said he got a lot of publicity out of it.

In Moscow, "I decided to go after the biggest celebrity in Russia," Sater said.

To contact the editors responsible for this story: Kevin Whitelaw at kwhitelaw@bloomberg.net, Andrew Martin, John Harney