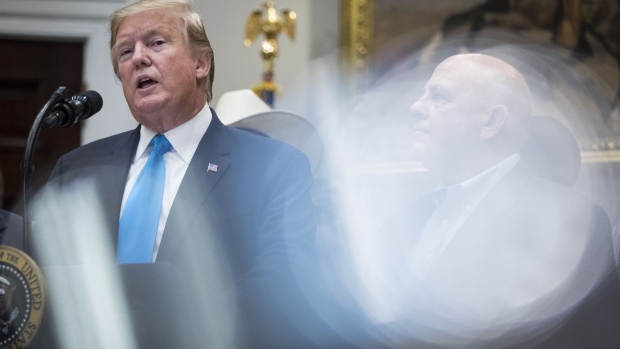 Donald Trump during an event with American farmers and ranchers at the White House. Photographer: Sarah Silbiger/Bloomberg , Bloomberg

President Donald Trump raised the possibility of delivering more aid to American farmers as promised purchases from trade deals with China and other countries have yet to materialize.

The administration has already allocated US$28 billion over the last two years to help make up for farm losses from Trump’s trade war with China.

In an all caps tweet on Friday, Trump said that “IF OUR FORMALLY TARGETED FARMERS NEED ADDITIONAL AID UNTIL SUCH TIME AS THE TRADE DEALS WITH CHINA, MEXICO, CANADA AND OTHERS FULLY KICK IN, PAID FOR OUT OF THE MASSIVE TARIFF MONEY COMING INTO THE USA!”

IF OUR FORMALLY TARGETED FARMERS NEED ADDITIONAL AID UNTIL SUCH TIME AS THE TRADE DEALS WITH CHINA, MEXICO, CANADA AND OTHERS FULLY KICK IN, THAT AID WILL BE PROVIDED BY THE FEDERAL GOVERNMENT, PAID FOR OUT OF THE MASSIVE TARIFF MONEY COMING INTO THE USA!

Only a day earlier, Trump’s agriculture secretary, Sonny Perdue, said that he doesn’t anticipate another round of trade aid payments to farmers and that he expects China to ramp up purchases later this year as disruptions from the coronavirus outbreak subside.

“The president’s tweet was a surprise to us,” Ted McKinney, Undersecretary of Agriculture for Trade, said at the USDA Agriculture Outlook Forum in Arlington, Virginia. “He will make that decision. And we will go with that decision.”

Although Trump often says the U.S. is taking in money from the tariffs he’s imposed, those costs are borne by American companies and consumers.

The Trump administration doled out US$16 billion in 2019 and US$12 billion in 2018 to help farmers who found themselves in the cross-hairs of his trade spat with Beijing. The farm rescue is more than twice as expensive as the 2009 bailout of Detroit’s Big Three automakers, which cost taxpayers US$12 billion.

Farmers comprise a key part of the rural, Midwestern base that helped push the president into the White House in 2016 and are essential to his re-election.

USDA projections this week showed a US$3.9 billion bump for exports to China in the year ended Sept. 30, leaving a whopping amount of corn, pork, soy and other purchases to be made in the last three months of the year to reach the trade accord goal. China pledged to buy an additional US$12.5 billion in U.S. agricultural goods this year on top of 2017 levels.

Perdue said he expects China to “live up” to the deal, and purchases will start ramping up in the northern hemisphere in the spring. And if China doesn’t follow through, the U.S. could retaliate with more tariffs, he said.

Farmers have been taking a cautious approach. More than half of U.S. farmers plan to spend less on capital equipment this year, and only 13 per cent plan to spend more, according to a survey conducted by the American Farm Bureau Federation, the nation’s largest general farm organization. Fewer than a quarter of farmers expect higher prices for their crops or livestock in the coming year, according to the survey, released this week.