This is a particularly stressful time for the average American: Former ambassador Heyman

The Trump administration slapped tariffs on roughly US$110 billion in Chinese imports on Sunday, marking the latest escalation in a trade war that’s inflicting damage across the world economy. China retaliated.

The 15 per cent U.S. duty hit consumer goods ranging from footwear and apparel to home textiles and certain technology products like the Apple Watch. A separate batch of about US$160 billion in Chinese goods -- including laptops and cellphones -- will be hit with 15 per cent tariffs on Dec. 15. President Donald Trump delayed part of the levies to blunt the impact on holiday shopping.

Investors sought the safety of the yen as the currency markets opened for trading, with the Japanese exchange rate advancing 0.3 per cent against the dollar. The New Zealand dollar slid 0.5 per cent, the worst performance among the Group-of-10 currencies. The offshore yuan fell 0.15 per cent to 7.1732 per dollar.

U.S. and Japanese equity futures fell in early Asian trading as the tariffs kicked in, even though the measures had been widely anticipated. S&P 500 futures opened 1 per cent lower before paring losses, and Treasury contracts advanced.

While the Trump administration has dismissed concern about a protracted trade war, business groups are calling for a tariff truce and the resumption of negotiations between the world’s two-largest economies.

Face-to-face talks between Chinese and American trade negotiators scheduled for Washington in September are still on, Trump told reporters Sunday after returning from Camp David.

“We are talking to China, the meeting is still on,” Trump said. The president repeated the assertion that China, not the U.S., is “paying” for the tariffs, and said that farmers hurt by Beijing’s retaliation on U.S. agricultural goods are being made “more than whole” by federal payments.

“We can’t allow China to rip us off anymore,” Trump added.

SEPTEMBER 1: Over $110 billion in Chinese imports to the U.S. are now under tariffs, while China has retaliated with tariffs on $75 billion of U.S. goods.

Here's what you need to know pic.twitter.com/60F5M1hvq5

China has repeatedly decried U.S pressure tactics, with signs that its officials are girding for a prolonged confrontation.

“China’s determination to fight against the U.S. economic warmongering has only grown stronger, and its countermeasures more resolute, measured and targeted,” according to a commentary by the official Xinhua News Agency after the tariffs kicked in. One thing that “White House tariff men should learn is that the Chinese economy is strong and resilient enough to resist the pressure brought about in the ongoing trade war.”

While Trump has repeatedly said China is paying for his tariffs, many companies and economists say that U.S. importers bear the cost -- and some of it is passed on to consumers.

The non-partisan Congressional Budget Office in August projected that by 2020, Trump’s tariffs and trade war will reduce the level of real U.S. GDP by about 0.3 per cent and reduce average real household income by US$580.

That followed a JPMorgan Chase & Co. note to clients estimating that the latest round of tariffs will increase the average cost per U.S. household to US$1,000 a year -- up from US$600 for duties enacted last year. That estimate is in the low range because it was based on a duty rate of 10 per cent, before Trump increased it to 15 per cent. 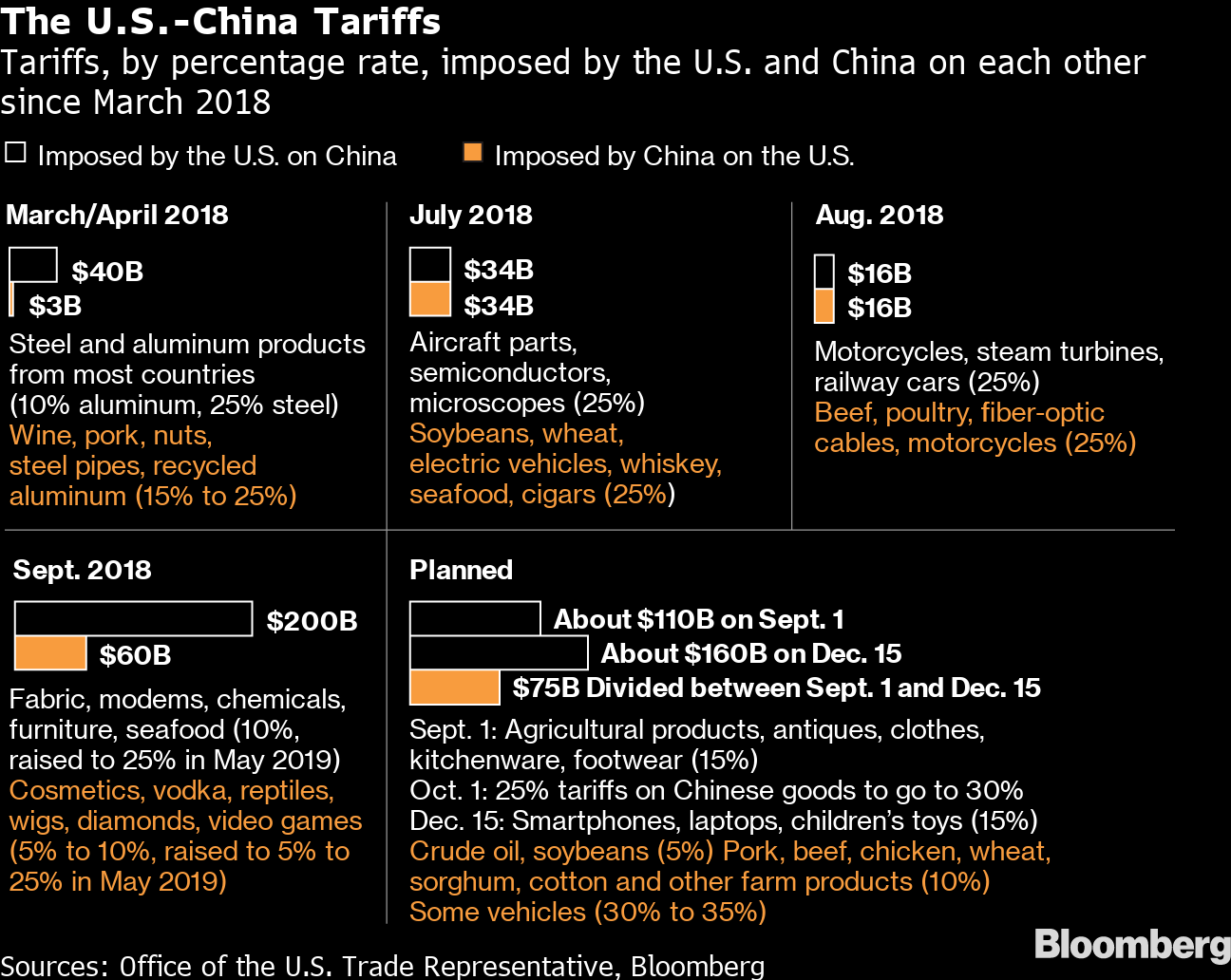 About 90 per cent of California-based JLab Audio’s headphones and other wireless products targeted for duties got hit Sunday, possibly hurting holiday sales and forcing a delay in hiring, CEO Win Cramer said. About 40 per cent of the company’s sales come in the fourth quarter, he said.

“If I had hair, I’d be pulling it out,” Cramer said. “I’m really concerned about the financial performance of the business, knowing that if we continue to eat this cost, how much it hurts.”

The tariffs are also harming the global economy. The International Monetary Fund in July further reduced its world growth outlook, already the lowest since the financial crisis, amid the uncertainty from the trade conflict.

China’s retaliation took effect as of 12:01 p.m. Sunday in Beijing, with higher tariffs being rolled out in stages on a total of about US$75 billion of U.S. goods. Its target list strikes at the heart of Trump’s political support -- factories and farms across the Midwest and South at a time when the U.S. economy is showing signs of slowing down.

Another issue that “Washington’s trade hardliners need to stop denying is that their trade war is hurting the American people and businesses,” according to the Xinhua commentary.

Higher Chinese duties that took effect Sept. 1 include an extra 10 per cent on American pork, beef, and chicken, and various other agricultural goods, while soybeans will get hit with an extra 5 per cent tariff on top of the existing 25 per cent. Starting in mid-December, American wheat, sorghum, and cotton will also get a further 10 per cent tariff. While China imposed a new 5 per cent levy on U.S. crude oil starting from September, there was no new tariff on liquefied natural gas.

The resumption of a suspended extra 25 per cent duty on U.S. cars will resume Dec. 15, with another 10 per cent on top for some vehicles. With existing general duties on autos taken into account, the total tariff charged on U.S.-made cars would be as high as 50 per cent.

Caught in the Crossfire 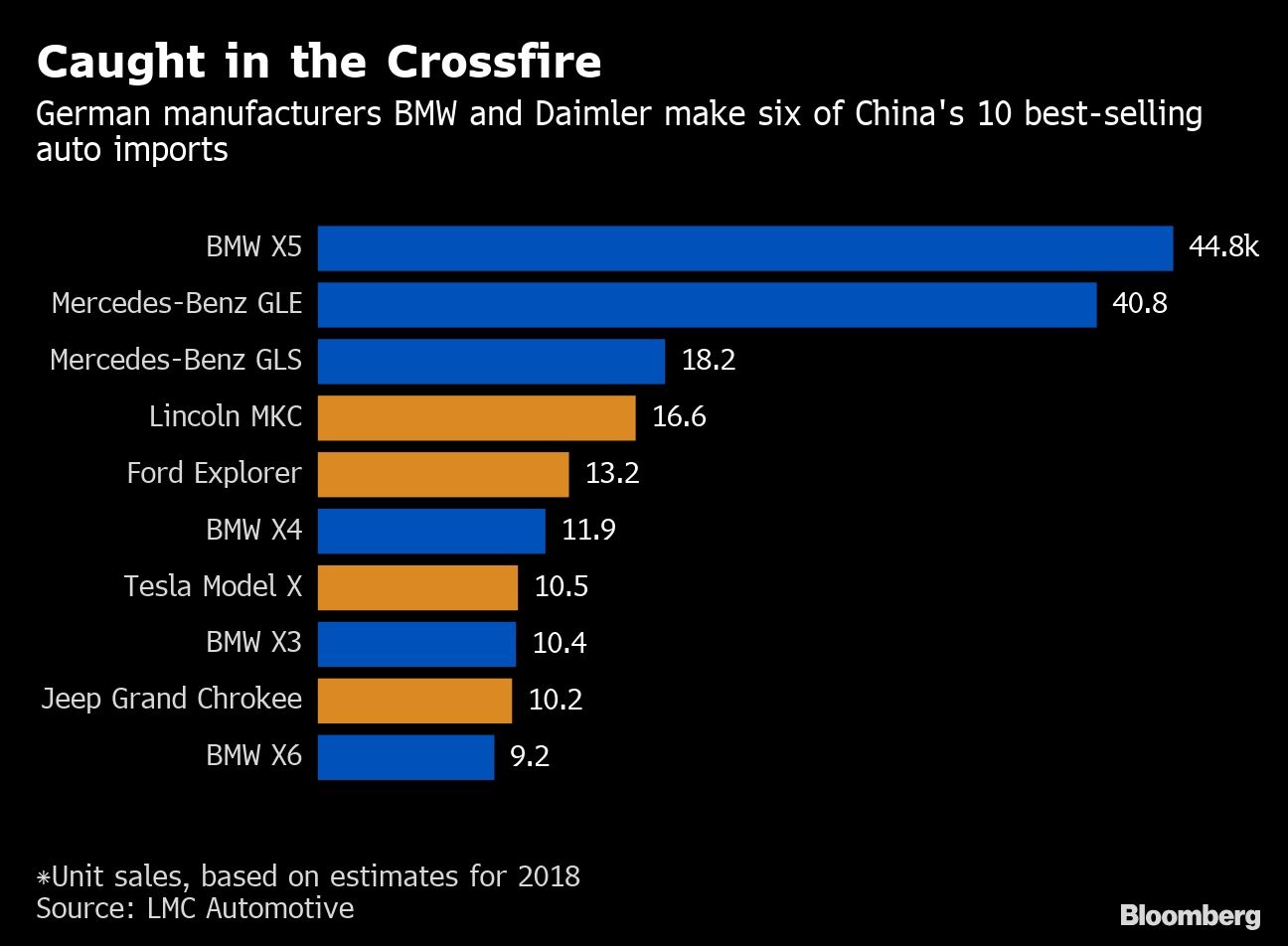 Gary Shapiro, president of the Consumer Technology Association, said the Trump administration’s approach of using tariffs to pressure China into a deal has backfired.

“U.S. companies have to spend more resources on constantly changing trade rules and less on innovation, new products and our economic health,” Shapiro said. “This is not how you reach a meaningful trade agreement.”

Richard Trumka, president of AFL-CIO, said on “Fox News Sunday” that taking on China is a good thing, but that the president has “done it the wrong way” with his tariff strategy.

There has to be an “multilateral approach” when taking on China’s trade practices, Trumka said. The AFL-CIO is the largest federation of unions in the U.S.

“It has to address currency rebalancing, it has to have a long-term slant to good jobs in this country. That’s not been the approach, unfortunately. We hope it becomes the approach but not so yet,” Trumka said.