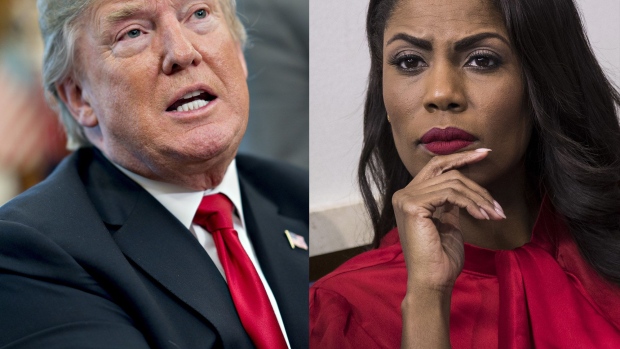 U.S. President Donald Trump speaks after signing an executive order to end family separations at the border in the Oval Office of the White House in Washington, D.C., U.S., on Wednesday, June 20, 2018. Trump reversed course on his policy separating immigrant children from parents who cross the U.S. border illegally, signing the executive order that he said would end the practice. Source: Andrew Harrer/Bloomberg , Source: Bloomberg and Getty Images

Andrew Brown, the arbitrator who decided the case, said the non-disclosure agreement Trump was seeking to enforce against Manigault Newman was so vague as to be unenforceable. Brown, who issued his decision on Sept. 24 and sent it to Manigault Newman’s lawyers on Monday, said she could recover legal fees from the Trump campaign entity that first initiated the proceeding.

Manigault Newman’s 2018 book, “Unhinged,” paints an unflattering portrait of Trump, claiming that he had used racial slurs and that he was not as sharp as he had been during his time as star of the reality TV show “The Apprentice.” Manigault Newman was a contestant on the first season of the show and returned for later seasons.

“Nobody in her life has done more for Omarosa than a man named Donald Trump,” the former president said Tuesday in a statement. “Unfortunately, like certain others, she forgot all about that -- which is fine with me!” He didn’t directly address the arbitrator’s decision.

“It’s over. We’ve won,” said John Phillips, an attorney for Manigault Newman in an email. “It’s a win we can all be proud of. People who signed these NDAs should sleep better and speak more freely.”

After Trump was elected president, he made Manigault Newman communications director for the White House office of public liaison. Then-Chief of Staff John Kelly fired her in January 2018.

Trump has largely lost cases against former aides or confidantes who have written about him. Earlier this year the Biden Administration dropped a suit against Stephanie Winston Wolkoff, a former friend and aide to First Lady Melania Trump, over her 2019 book, “Melania and Me.”

While Trump was in office, his administration failed to stop former National Security Advisor John Bolton from writing a highly critical book. His family was also unsuccessful in trying to block his niece Mary Trump’s 2020 book, “Too Much and Never Enough: How My Family Created the World’s Most Dangerous Man.”