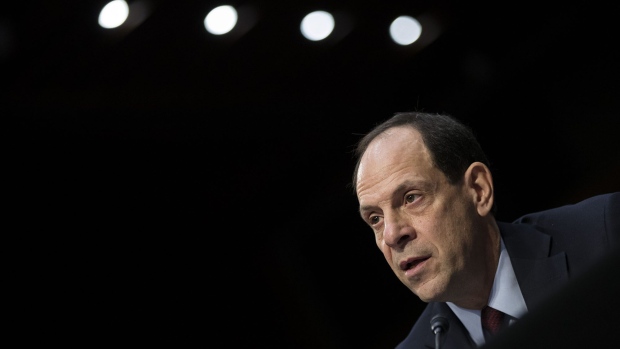 President Donald Trump has removed the head of a team of U.S. auditors that will oversee the US$2 trillion in federal coronavirus relief spending, his latest move against inspectors general who are supposed to serve as independent watchdogs.

Trump ousted Glenn Fine from his position as acting Defense Department inspector general, which also made him ineligible to continue as chairman of the new Pandemic Response Accountability Committee. Michael Horowitz, head of a council of federal inspectors general, chose Fine for the new role of pandemic-spending watchdog last week.

“Mr. Fine is no longer on the Pandemic Response Accountability Committee,” Dwrena Allen, a spokeswoman for the Defense Department inspector general’s office, said in a statement Tuesday.

Trump has increasingly taken action against inspectors general he considers insufficiently loyal. He tweeted criticism of another inspector general on Tuesday. Last week, he fired Michael Atkinson, the intelligence community inspector general, who informed Congress -- over White House objections -- of the whistle-blower’s complaint that ultimately led to Trump’s impeachment. The president told reporters Atkins “did a terrible job -- absolutely terrible.”

Representative Adam Schiff, the California Democrat who is chairman of the House Intelligence committee and led the House proceedings in Trump’s impeachment, said in a tweet Tuesday that the job of inspectors general “is to uncover the truth. Exactly why Trump fears them.”

Senate Democratic Leader Chuck Schumer of New York said in a statement that “President Trump is abusing the coronavirus pandemic to eliminate honest and independent public servants because they are willing to speak truth to power and because he is so clearly afraid of strong oversight.”

On Tuesday, Trump tweeted his denunciation of the inspector general’s office at the Department of Health and Human Services for issuing a report that found “severe shortages of testing supplies and extended waits for test results” at hospitals as well as “widespread shortages of personal protective equipment” and “anticipated shortages of ventilators.”

Trump called the report “Another Fake Dossier” and questioned the inspector general’s honesty.

“Why didn’t the I.G., who spent 8 years with the Obama Administration (Did she Report on the failed H1N1 Swine Flu debacle where 17,000 people died?), want to talk to the Admirals, Generals, V.P. & others in charge, before doing her report,” Trump said in a tweet. “Another Fake Dossier!”

Why didn’t the I.G., who spent 8 years with the Obama Administration (Did she Report on the failed H1N1 Swine Flu debacle where 17,000 people died?), want to talk to the Admirals, Generals, V.P. & others in charge, before doing her report. Another Fake Dossier!

Earlier, Horowitz, who serves as the Justice Department’s inspector general, said oversight would persist despite the president’s actions.

“The inspector general community will continue to conduct aggressive, independent oversight,” Horowitz said in an April 4 statement posted online after the dismissal of Atkinson, the intelligence community watchdog. Horowitz specified that includes the accountability panel that Fine was going to lead.

The body would work to “ensure that over US$2 trillion dollars in emergency federal spending is being used consistently with the law’s mandate,” Horowitz said in the statement.

Fine is reverting to his previous position as principal deputy inspector general and remains at the Defense Department, Allen said.

Before his work at the Pentagon, Fine had spent 11 years in the inspector general’s role at the Justice Department. His work there included reports on President George W. Bush’s firing of four U.S. Attorneys and on politically driven hirings in the department’s civil rights division. His audits also included one in 2010 alleging FBI misuses of national security letters to obtain telephone records.