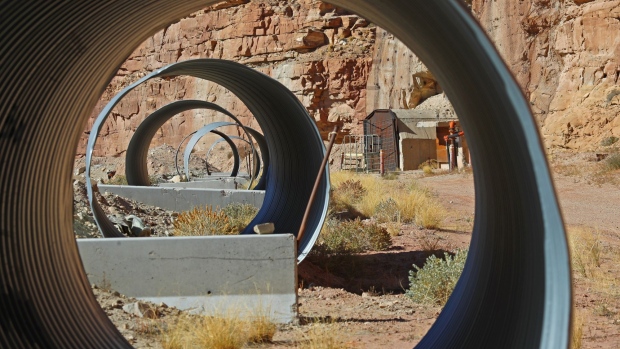 A White House task force is recommending that President Donald Trump direct the federal government buy more uranium from domestic producers, according to two people familiar with the matter.

The purchase of uranium by the U.S. Defense Department is among the recommendations being made by the U.S. Nuclear Fuel Working Group, comprised of cabinet level and other high-ranking officials, according to the people, who requested anonymity to discuss non-public deliberations.

The task force was established to study ways to revive the U.S. uranium mining industry.

One of the people said the Energy Department, home of the National Nuclear Security Administration, which maintains the nation’s nuclear stockpile, would be involved in the effort as well, which could include the creation of a new national uranium stockpile.

It remains to be seen what options Trump, who has yet to be briefed on the non-public report, might choose to execute, if any -- though he has been sympathetic to both the mining and nuclear power industries.

The White House and the National Security Council declined to comment.

Any government intervention could be a windfall for the handful of domestic uranium miners, including Energy Fuels Inc. and Ur-Energy Inc., two companies that earlier petitioned the White House to put a 25 per cent domestic market quota on foreign imports of uranium, citing national security concerns.

The White House rejected that request in July and instead Trump formed the working group comprised of six cabinet secretaries and several top White House officials to analyze other options.

Among the options working group staff considered was a request by the nuclear industry to use the 1950 Defense Production Act, requiring the government to buy American uranium to replenish its stockpiles and for other purposes.

Domestic uranium producers have asked the government to ensure uranium production of as much as 10 million pounds per year through measures such as the creation of a new “Federal Uranium Security Stockpile.”

About 90 per cent of the country’s uranium -- used to power nuclear reactors and submarines as well as to make nuclear weapons -- is imported from countries such as Canada, Kazakhstan, Australia, and Russia, according to Energy Department data.