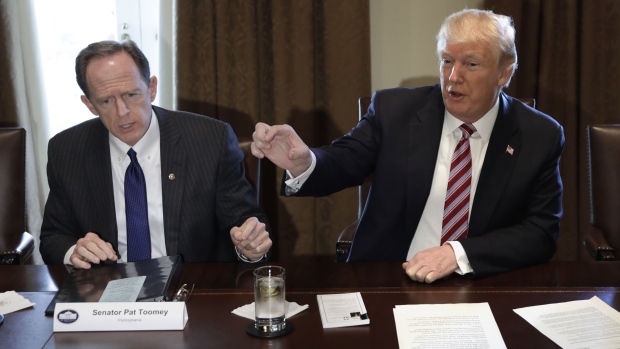 U.S. President Donald Trump, right, speaks while Senator Pat Toomey, a Republican from Pennsylvania, listens during a meeting with bipartisan members of Congress on trade in the Cabinet Room of the White House in Washington, D.C., U.S., on Tuesday, Feb. 13, 2018. Republican lawmakers cautioned Trump in a White House meeting against levying tariffs on steel and aluminum imports, warning that it would raise prices of the metals and potentially cost the U.S. jobs in other industries including car manufacturing. Photographer: Yuri Gripas/Bloomberg , Bloomberg

(Bloomberg) -- Retiring Republican Senator Pat Toomey said Donald Trump’s influence on the party is diminishing “rapidly” and the former president has little chance of becoming the GOP presidential nominee in 2024.

Trump has announced he’ll make another run for the presidency. But Republicans fell well short of expectations during last month’s midterm elections and those losses, along with Trump’s 2020 presidential defeat and the GOP’s loss of the House and Senate in 2018, have demonstrated that voters -- and the party -- have moved past Trump.

“Republicans don’t like losing,” Toomey, 61, told Bloomberg News in an interview on Friday. “I don’t think Donald Trump’s going to be our nominee. And I think that’s going to serve us well.”

Many GOP leaders have moved further away from the former president after a dinner he held with a white supremacist leader last month.

Senate Republican leader Mitch McConnell said Tuesday anyone who meets with people who espouse antisemitic or White supremacist views was “highly unlikely to ever be elected president of the United States,” stopping short of naming Trump by name. South Dakota’s John Thune, the No. 2 Senate Republican, told a panel of Bloomberg reporters and editors in Washington this week that his party shouldn’t be focused on one person and should welcome a new generation of leaders.

While a growing populist movement in the GOP challenges the traditional conservative values Toomey holds, including free trade and less regulation, he said the 2022 midterms showed that more mainstream conservatives remain the most electable.

“I think one of the important lessons from this past election is how quite well sort of conventional Republicans did, at the very same time that the ultra-pro Trump candidates were getting crushed,” said Toomey, who will leave the Senate in January after two terms.

He said it’s also evident in the under-performance by Trump-backed candidates like Senator-elect J.D. Vance in Ohio, who won election by 6 percentage points, while Ohio’s GOP Governor Mike DeWine won another term with a 26-point lead. And in his state of Pennsylvania, Toomey said that Republican Senate nominee Oz Mehmet was dragged down significantly by GOP gubernatorial nominee Doug Mastriano, a Trump-backed candidate who questioned the outcome of the 2020 presidential race and who lost his contest by 15 percentage points.

Toomey praised Oz, who also was supported by Trump, saying he campaigned hard but was hobbled by a “brutal primary that drove his negatives through the roof.”

Meanwhile, Toomey touted David McCormick, the former CEO of Bridgewater Associates and Oz’s primary opponent, as a possible candidate to run against incumbent Democratic Senator Bob Casey, who is up for reelection in 2024.

“I think David McCormick would be a very strong candidate against Bob Casey or in any other statewide race,” Toomey said, stopping short of endorsing him. “David McCormick is a very impressive guy.”

Toomey said he has no plans to pursue politics following his departure from the Senate. He said he’d probably enter the private sector, but that he hasn’t pursued roles in the cryptocurrency industry or other areas.

The Pennsylvania senator said he won’t back Trump if he’s the 2024 GOP presidential nominee, and that he doesn’t have an early favorite among possible contenders like former UN Ambassador Nikki Haley, Florida Governor Ron DeSantis, former Secretary of State Mike Pompeo and South Carolina Senator Tim Scott. Toomey said he was “very impressed” by Scott, who will replace him next year as the top Republican on the Senate Banking Committee.

Toomey said Republicans should coalesce around a few candidates before primary voting starts to avoid the large slate of Republican candidates that boosted Trump in 2016.

“My theory is this field is likely to winnow down by the time we’re actually casting votes,” he said.