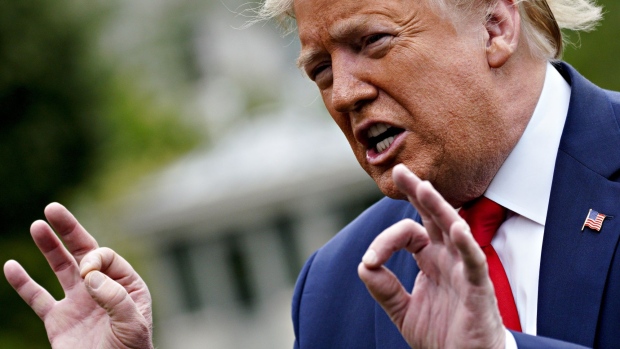 U.S. President Donald Trump speaks to members of the media before boarding Marine One on the South Lawn of the White House in Washington, D.C., U.S., on Thursday, May 14, 2020. Trump is visiting the factory of Owens and Minor, a medical equipment distributor, in Allentown, Pennsylvania. Photographer: Andrew Harrer/Bloomberg , Bloomberg

President Donald Trump said he is taking hydroxychloroquine, the anti-malaria drug that he’s promoted as a treatment to combat coronavirus infection, despite government warnings that it can cause serious side effects.

Trump said Monday at the White House that he’s been taking the drug for about a week and half. Vice President Mike Pence’s press secretary, Katie Miller, tested positive for coronavirus on May 8.

Trump was not seen in Pence’s company following the diagnosis until Monday, when the vice president joined him for a meeting with restaurateurs.

Trump is a self-admitted germophobe, telling reporters he was wary of shaking hands even before the coronavirus pandemic, and theatrically distancing himself from former patients during press events.

At the same time, he has avoided other steps recommended by public health experts to slow the spread of the virus, such as wearing a mask. The Centers for Disease Control and Prevention says that wearing a mask when social distancing is not possible could prevent people who have the virus but don’t know it from spreading it to others.

The president has dismissed suggestions that he put on a mask, saying he is tested frequently. He said Monday he receives a test “every couple of days” and added he has “shown always negative.”

There is scant evidence that hyroxychloroquine is effective against the coronavirus.

The Food and Drug Administration on April 24 cautioned against the use of hydroxychloroquine or chloroquine for Covid-19, the illness caused by the coronavirus, outside of a hospital setting or clinical trial, citing a risk of heart rhythm problems.

“I want the people of this nation to feel good,” Trump said at the meeting, where he disclosed to reporters that he’s taking the drug. He also said he had taken azithromycin, an antibiotic commonly known as a z-pak, and that he is taking a zinc supplement.

“There is a very good chance this has an impact, especially early on,” he said. “I’m telling you, so far I seem O.K.”

Pence didn’t answer when reporters asked whether he, too, was taking the drug. The White House didn’t immediately respond to a question about whether Miller’s diagnosis prompted Trump to begin taking it.

On Monday night, the White House released a memorandum from Sean Conley, the physician to the president and a Navy commander.

Conley said in the memo that after discussions with Trump “for and against the use of hydroxychloroquine, we concluded the potential benefit from treatment outweighed the relative risks.”

The memo, however, did not say whether the doctor had actually prescribed the drug, or if Trump is taking it. Conley did confirm that the president “receives regular Covid-19 testing, all negative to date.”

The National Institutes of Health’s Covid-19 Treatment Guidelines say the malaria drug alone should be avoided at high doses or with azithromycin, outside of clinical trials, because of the same concerns.

One of Trump’s top medical advisers, Anthony Fauci, the director of the National Institute of Allergy and Infectious Disease, has publicly discouraged use of the drug against the coronavirus.

“Here’s my evidence: I get a lot of positive calls about it,” Trump said. He added that he had not started taking the drug at the recommendation of his doctor, but had instead asked the White House physician whether he could take it and was told he could.

Trump first began touting the drug in mid-March, creating a rush for supplies of the pills among hospitals, doctors and people who wanted to use it as a preventive. The surge created shortages for lupus and rheumatoid arthritis patients, who also use the medicine. In April, azithromycin also went into shortage, according to the FDA.

During the week of March 20, hydroxychloroquine prescriptions jumped to 298,660, more than double a week earlier, according to data compiled by Bloomberg Intelligence. Prescriptions have since plummeted back to nearly normal levels.

When used by healthy patients on its own, hydroxychloroquine has a relatively well-established profile and is considered low-risk.

In several trials of hospitalized, severely ill patients with Covid-19, it has been shown to raise heart risks and rates of death when combined with azithromycin. The medicine is known to interfere with the heart’s electrical signals in extremely rare cases, and can cause sudden death.

The president’s announcement was met by alarm on Fox News, where anchor Neil Cavuto pointed to a Department of Veterans Affairs study showing it was linked to higher rates of death in hospitalized Covid-19 patients with pre-existing conditions and other studies showing it was ineffective.

Some of the network’s opinion hosts, in particular Laura Ingraham, have promoted use of the drug against the coronavirus. Ingraham has met with Trump at the White House to advocate for the malaria drug, according to the Washington Post.

Trump, who will be 74 next month, suffers from pre-existing conditions including high cholesterol and obesity, according to reports from his medical exams as president.

--With assistance from Michelle Fay Cortez and Anna Edney.