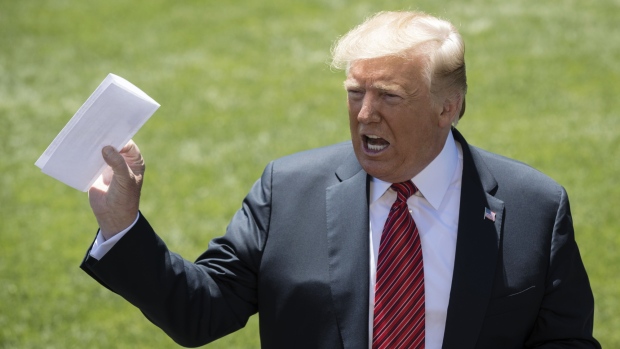 U.S. President Donald Trump holds up a page of what he described as a deal with Mexico while speaking to members of the media before boarding Marine One on the South Lawn of the White House in Washington, D.C., U.S., on Tuesday, June 11, 2019. Trump told reporters that he struck a secret deal with the Mexico that will take effect when he wants it to -- despite the country's insistence that there are no secret components of an immigration deal struck last week. , Bloomberg

Bloomberg-- U.S. President Donald Trump is promising a “major fireworks display’’ in Washington this July Fourth. Next year, displays across the U.S. won’t be so grand if his latest proposed tariffs take effect, fireworks companies say.

The list of US$300 billion in Chinese goods targeted for tariffs includes professional display and consumer fireworks. Companies and nonprofit groups that raise money by selling fireworks are lobbying the Trump administration –- including a personal appeal to the president by one executive -- to exempt them from the duty on grounds it won’t help get a trade deal with China, but would punish firms and Americans who love fireworks.

A new tariff shouldn’t affect this year’s Fourth of July celebrations since products have already shipped -- unless retailers independently decide to raise prices. But special events later this year and next year’s holiday displays could be shorter or canceled because of the higher cost, companies say.

“President Trump is talking about making the Fourth of July here in Washington D.C. the biggest, the best ever,’’ said Julie Heckman, executive director of the American Pyrotechnics Association. “If this is 2020 and the skies were dark, what kind of an event would that be?’’

Fireworks executives are among those filing comments and preparing to testify at a seven-day public hearing that started Monday to address the tariffs and escalating trade war. The companies say fireworks can’t easily be produced outside of China, which invented them. Fireworks have low profit margins, meaning duty costs would likely be passed on to consumers, municipalities and nonprofits that would have to pay more.

Bruce Zoldan, chief executive officer of Phantom Fireworks in Youngstown, Ohio, said he made his case directly to Trump in a private meeting with business executives in Washington on May 22. “He knows that fireworks are loved by his supporters and most Americans on the Fourth of July,’’ Zoldan said.

Moving firework production out of China isn’t a realistic option. If the duty goes into effect as the administration proposes, the industry will lose several smaller companies, while some firms will have no choice but to fire employees as sales decline, Zoldan said.

“These small municipalities are already budget strapped and struggle year after year for funding to put on their community Fourth of July displays,’’ Spielbauer wrote. “In most cases, a 25 per cent hike in price will force many communities to consider not celebrating with fireworks at all.’’

Thousands of nonprofit organizations have helped take care of community needs not covered by private resources and government programs by selling fireworks, Walt Butler, commander of American Legion Post 491 in Ceres, California, said in his online comments. The proposed tariff will decrease revenues to fund the group’s programs and reduce its bottom line substantially, he said.

“The vast majority of our customers have a defined budget for their backyard fireworks celebrations and will now be extremely disappointed that their budget will not afford them the kind of celebration that they would like to have of our nation’s birthday,” Butler said.