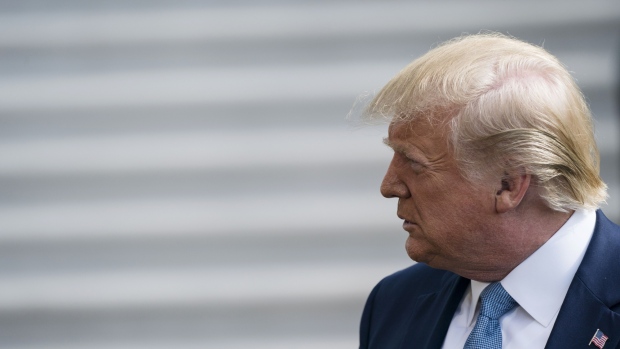 U.S. President Donald Trump outside of the White House in Washington D.C. on Oct. 4. , Bloomberg

(Bloomberg) -- President Donald Trump is expected to sign a pair of executive orders on Wednesday that would limit the use of memos, letters, and other guidance that federal agencies use to help individuals and companies comply with regulations, a person briefed on the plans said.

Conservatives and business groups have long complained that the agencies use the process to establish “stealth regulation” that circumvents Congress and avoids public scrutiny. Unlike formal government rules the interpretations are issued without the typical notice and comment period required by law.

“Americans deserve to have their side of the story properly considered by the government and not punished by rogue agencies who use fear and costly court cases to force Americans into following their directives,” the White House said in talking points on the executive orders distributed to supporters on Tuesday.

Under the Obama administration, agencies broadened existing laws and regulations through interpretations that were then issued in blogs, letters memos and brochures.

Trump has made deregulation a cornerstone of his presidency, and the executive orders are intended to protect small businesses from agencies who use it as an “off-the-book way around the regular rule-making process,” the White House said in the talking points.

The White House declined to comment on Tuesday night, but the president is scheduled to sign the orders “on transparency in federal guidance and enforcement” on Wednesday afternoon.

According to the talking points, one executive order would require agencies to seek public input on certain guidance while a second executive order seeks to prohibit “secret or unlawful bureaucratic interpretations of rules” as well as “unfair or unexpected penalties from agencies.”

Among the examples given in the talking points was a 2015 blog post from the Department of Labor that declared many independent contractors should be classified as employees, which the White House said would have increased costs for thousands of small businesses.

Another example cited involved the Army Corps of Engineers deeming permafrost in Alaska to be subject to the Clean Water Act thereby prohibiting the expansion of a pipe fabrication business that provided services to the North Slope Oil Fields.

Other past agency rules have included a 2013 Consumer Financial Protection Bureau guidance meant to discourage discriminatory automobile lending practices, and a U.S. Forest Service document issued during the waning days of the Obama administration restricting access to timber, mining, and other activities in the Tongass National Forest in Alaska.

Other examples include a 2016 Housing and Urban Development document warning landlords that denying leases to people with criminal records might be a violation of the Fair Housing Act, and an Education Department policy statement limiting preschoolers from being suspended or expelled.

A 2018 report by the House Oversight Committee, then under Republican leadership, found that of more than 13,000 guidance documents issued by federal agencies since 2008, only 138 had been formally submitted to Congress and the General Accounting Office.

A proponent of the agency interpretations, James Goodwin, a senior policy analyst with the Center for Progressive Reform, has called them a form of public protection.

“Each of these guidance documents help safeguard you and me,” Goodwin said in an interview last year.