Kudlow: Everything ‘Completely in Place’ on U.S.-China Trade Deal

After three years of tweets and tariffs, President Donald Trump has arrived at his China moment.

The phase-one deal to be signed Wednesday is expected to include China’s commitments to respect American intellectual property and not manipulate its currency. U.S. officials also anticipate US$200 billion in new purchases that should help reduce a yawning trade deficit and repair some of the damage suffered by farmers. It hands Trump at least a partial agreement many skeptics doubted was ever possible. In another concession, the Trump administration on Monday reversed an August decision to designate China as a currency manipulator.

But even that political victory leaves Trump confronting the same China conundrum that has plagued his predecessors. The broad and bipartisan agreement in Washington is that American presidents have for decades been hoodwinked by a China that has often failed to deliver on its promises.

Trump and his lieutenants, of course, insist that this time is different, that experts who see phase one as a rebranding of old guarantees are wrong. Unlike agreements negotiated by prior administrations, this one is enforceable, they say, and there will be real and immediate economic repercussions for China if it comes up short.

“We think it was a good negotiation, we think it will make a real difference,” U.S. Trade Representative Robert Lighthizer told reporters on Dec. 13. “A skeptic would say ‘we’ll see’ and that’s probably a wise position to take. But our expectation is that they keep their obligations and in any event, they’re enforceable.”

Also, it’s not the end of the story, the White House says. Coming soon, though even Trump acknowledges probably not before the November U.S. presidential election, is a second deal that will address long-standing American complaints not covered in the initial 86-page document. Among those: the state subsidies -- from discounted loans to cheap electricity -- that have nurtured a growing club of Chinese multinationals. 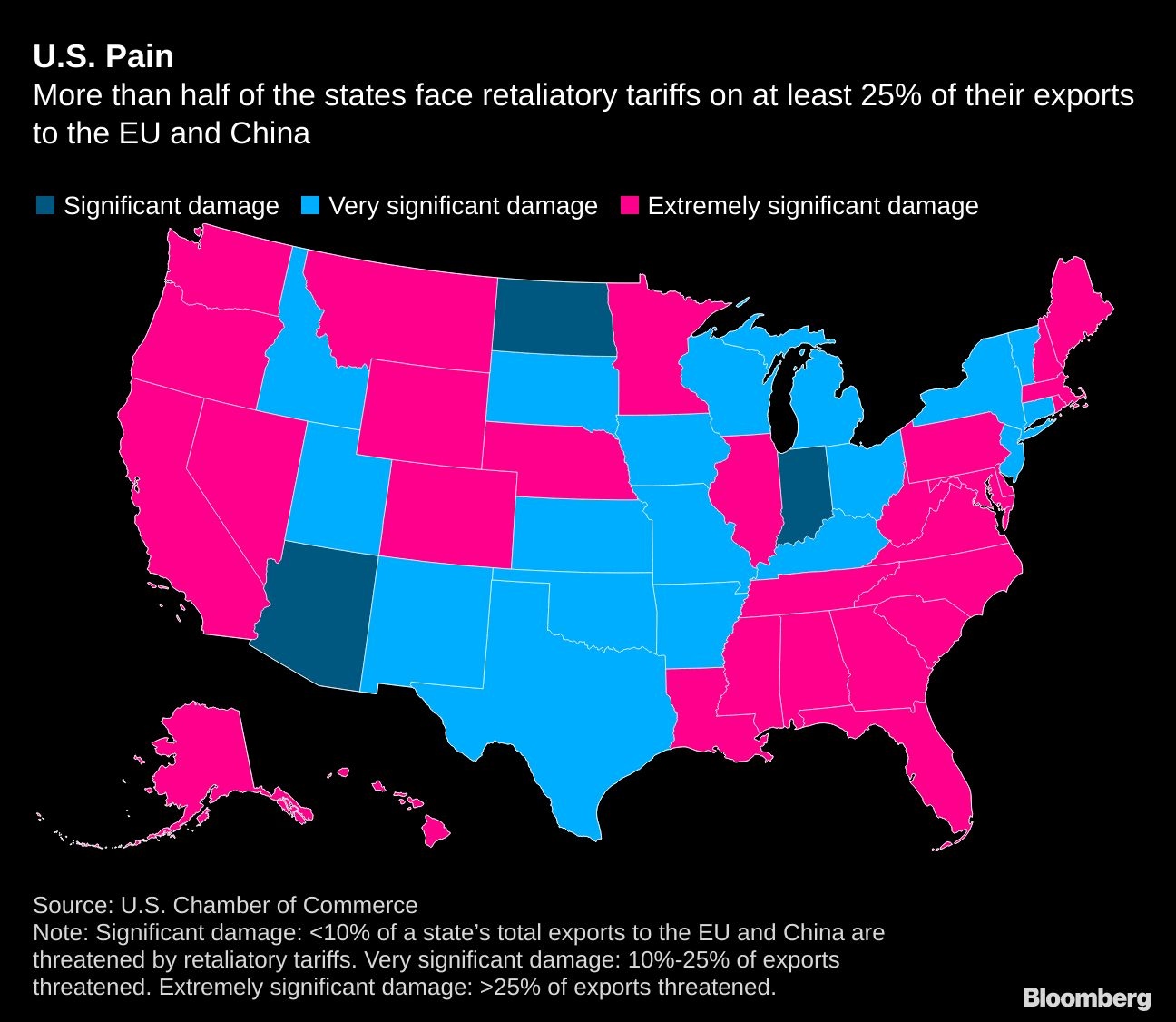 Some inside and close to the White House have their own doubts that second installment will ever materialize. Yet the more immediate question is whether China will even live up to the promises in the first phase. And if not, the question becomes whether Trump will have the political courage to take action ahead of the election, even it if risks roiling the markets on which he is hanging his economic credentials.

“There is a real enforcement provision,” U.S. Treasury Secretary Steven Mnuchin said Sunday on Fox News. “And if they don’t comply with the agreement, the president retains the authority to put on tariffs, both existing tariffs and additional tariffs.”

In a talking-points memo distributed to supporters last month, the administration said it called for each country to establish a special office to monitor the deal’s implementation and address any disputes. If conflicts aren’t resolved within 90 days, the U.S. could take unspecified “proportionate” action against China and vice versa. Either party could also abandon the deal, of course.

But some analysts say such a framework risks being inherently political.

Wendy Cutler, a veteran trade negotiator now at the Asia Society Policy Institute, says that by not deferring to independent panels or arbitrators, the dispute mechanism leaves the question of violations -- and how to respond -- in the eye of the beholder. That means politics and competing economic pressures and interests are likely to intrude, as they have before. It also means that the only arbiter of whether the Chinese are keeping their end of the bargain will be the Trump administration, which may be loath to admit they are not.

“What does it say for one of his key negotiating accomplishments if the president has to admit the agreement isn’t working as intended?” Cutler says.

Steve Bannon, Trump’s former White House chief strategist, says there won’t be enough time before November for the president to take action if China doesn’t abide by the deal’s terms. “I don’t think we’ll be able to ascertain whether they lived up to the commitments until after the 2020 election,” he says.

Bannon, who since leaving the administration in 2017 has made hawkishness on China a central part of his brand, says hardliners like him who see communist China as an existential threat to America remain disappointed by a phase-one deal they see as easing the pressure on Beijing. A second phase will only be possible if China is put under “extreme duress” by an economic assault on multiple fronts, including restrictions on access to U.S. capital markets, he told Bloomberg News.

More moderate observers have their doubts as well. Jude Blanchette, a China expert at the Center for Strategic and International Studies in Washington, says there are signs already that the Asian nation and particularly its own economic nationalists have been emboldened by the phase-one deal and are shrugging off the commitments it includes.

“There’s a darn good chance we just see a repeat of this show, which has been going on certainly since WTO accession in 2001 of China doing what it can to get its tiptoes right up to the letter of the law but in fundamental ways ignoring the spirit of it,” Blanchette says.

That is in part because everything from Trump’s impeachment to the looming election and even the president’s handling of Iran is adding to China’s perception of weakness rather than strength in Washington.

“They smell blood for Trump,” Blanchette says. “There has always been, especially since impeachment, a narrative in China that we’ve got him where we want him, we’ve got a lot more leverage over him than we had.”

Rod Hunter, who agonized over China policy while on President George W. Bush’s National Security Council and is now a partner at law firm Baker McKenzie, argues that no single agreement can bridge the huge “asymmetry of interests” between the U.S. and China over key issues like the heavy role of the state in the Chinese economy.

“We see that as a problem. But the Chinese government sees that as a feature, a virtue of their system,” Hunter says.

For its part, Beijing is pointing to progress.

A foreign investment law that took effect Jan. 1 bans administrative agencies from forcing technology transfers. The government also brought forward plans to allow full foreign ownership of life insurers, futures, securities and mutual fund companies by 2020, after cracking the door open in 2018. And while the U.S. labeled China as a “currency manipulator” in August at the height of trade war, the People’s Bank of China has long relinquished direct intervention.

“China has made steady strides in reform and opening-up over the past year,” Cui Tiankai, China’s ambassador to the U.S., said last week at a gala in New York for Chinese companies that invest in the U.S.

Bridging the differences requires a careful balance of diplomacy and leverage. One solution being pushed by Mnuchin is to revive a forum for bilateral discussion that the Trump administration disbanded in 2017, but it’s unclear yet whether the president will go for that idea.

Hunter and others acknowledge that even if China does not comply with the terms of the phase-one deal, Trump has still managed to reset the relationship in ways other than the notable redirection of global supply chains and a reduction in Chinese imports, which is why there is so much talk in policy circles of a decoupling or a new Cold War.

The administration has enforced a new, broader conception of national security and given defense and intelligence officials a bigger say in economic policy, particularly on China. In practical terms that has meant stricter curbs on Chinese investment in the U.S. and on the ability of American technology companies to do business with China, as seen most vividly in the blacklisting last year of Chinese tech giant Huawei Technologies Co.

Those efforts aren’t ending with the new truce. In fact, they are expanding. In the pipeline is a new Commerce Department rule to restrict U.S. imports of telecommunications equipment -- such as that made by Huawei -- that might threaten U.S. national security.

Tariffs, meanwhile, will remain a blunt stick. According to the Peterson Institute for International Economics, average U.S. levies on Chinese imports will be 19.3% even after the deal takes effect -- more than six times higher than before the trade war began in 2018.