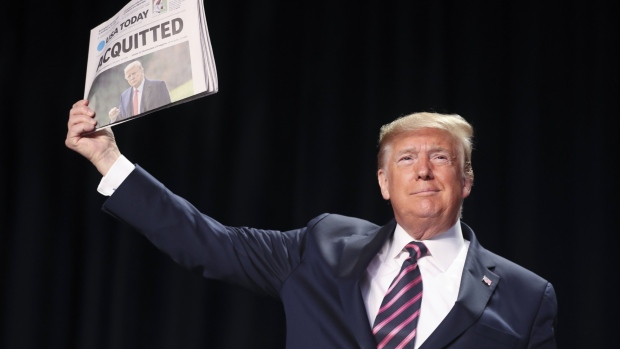 U.S. President Donald Trump holds up a copy of USA Today newspaper with a banner headline that reads "Acquitted" as he arrives to annual National Prayer Breakfast at the Washington Hilton in Washington, D.C., Feb. 6, 2020.

President Donald Trump used the annual National Prayer Breakfast on Thursday to attack his political enemies after his partisan acquittal on impeachment charges.

“As everybody knows, my family, our great country, and your president have been put through a terrible ordeal by some very dishonest and corrupt people,” Trump said at the lectern.

“They have done everything possible to destroy us,” Trump continued, without naming anyone in particular. “They know what they are doing is wrong, but they put themselves far ahead of our great country.”

As Trump entered the breakfast at a hotel in the nation’s capital, he held up copies of newspapers with banner headlines saying “acquitted” as House Speaker Nancy Pelosi looked on just five seats away.

Appearing to take a swipe Mitt Romney, the only Senate Republican who voted Wednesday to support Trump’s conviction on the charge of abuse of power, Trump continued, “I don’t like people who use their faith as justification for doing what they know is wrong.”

In explaining his vote on the impeachment articles, Romney said: “As a senator juror I swore an oath before God to exercise impartial justice. I am profoundly religious,” he said on the Senate floor. “My faith is at the heart of who I am.”

He continued: “I take an oath before God, as enormously consequential. I knew from the outset that being tasked with judging the President, the leader of my own party would be the most difficult decision I have ever faced. I was not wrong.”

At the breakfast Thursday, Trump also appeared to take a shot at Pelosi after his comments seeming to question Romney’s faith. “Nor do I like people who say, ‘I pray for you,’ when they know that that’s not so.”

In December, Pelosi had been asked to respond to Representative Doug Collins’ statement that the Democrats were trying to impeach Trump because they hate him. Collins, a Republican from Georgia, was a staunch defender of Trump during the impeachment hearings.

“I don’t hate the president,” Pelosi told reporters at the time, after announcing that the was asking the House to impeach Trump. “I pray for the president all the time.”