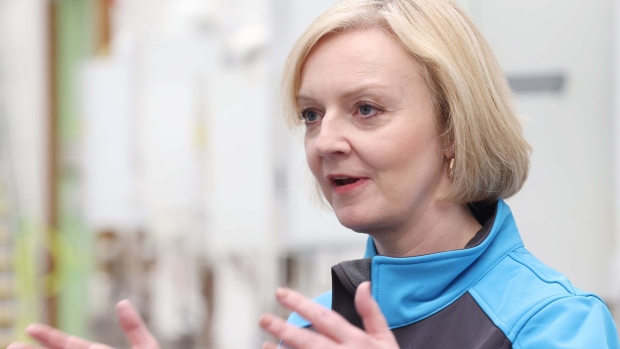 (Bloomberg) -- Beleaguered UK Prime Minister Liz Truss said her government has a “clear plan” to fix the root cause of an energy crisis that has fueled skyrocketing inflation, in an effort to win public support for policies that prompted more than half of Britons to call for her resignation.

“I am going to do things differently. It involves difficult decisions and does involve disruption in the short term,” Truss wrote in The Sun newspaper. “Not everyone will like what we are doing, but I want to reassure the public that the Government has a clear plan that I believe is right for the country.”

Truss’s Conservative government unveiled a huge package of unfunded tax cuts a week ago, triggering a selloff in the pound and government bonds, leaving her party trailing the opposition Labour by a record distance. The government estimates that its aid package to help people with energy bills will cost £60 billion ($67 billion) over the next six months, with the program set to run for two years.

In an accompanying editorial, the Rupert Murdoch-owned Sun repeated its backing for Truss and her plan, and sought to open a new avenue of debate by tying the economy’s woes to the legacy of Tony Blair and Gordon Brown’s premierships, as well as to the ensuing three Tory prime ministers “who increasingly also believed in an ever larger State.”

Truss heads into her Conservative Party’s annual conference on Sunday with the challenge of restoring her standing among Tory MPs and persuading the financial markets that the party still stands for responsible management of the economy.

“We are cutting taxes so you keep more of the money you earn,” Truss wrote. “We will benefit tens of millions of hard-working people across the country by reversing the rise in National Insurance and cutting the basic rate of income tax next year.”