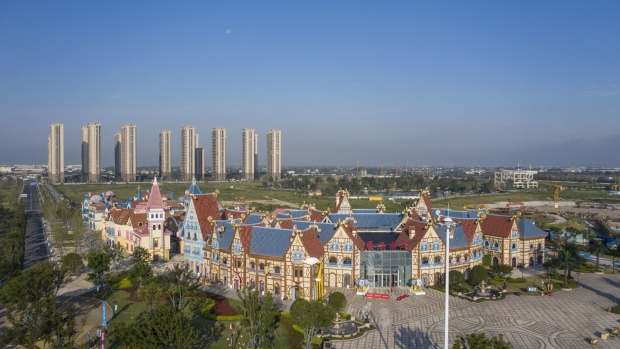 (Bloomberg) -- Trust firms that have issued at least $5 billion in high-yield products linked to China Evergrande Group are bracing for a cascade of losses after the cash-strapped developer said it may no longer be able to meet its financial obligations.

At least three firms, including Citic Trust Co., China Foreign Economy and Trade Trust Co. and National Trust, notified clients over the past few days that they risk missing payments on Evergrande products due to the developer’s strained finances and will take legal action to protect investors, people familiar with the matter said, asking not to be named discussing private deliberations. At least five trust companies held emergency meetings over the weekend to discuss how to handle potential disputes with investors, the people said.

The meetings illustrate how a key group of onshore Evergrande creditors are responding to a Friday statement from the developer in which it formally acknowledged for the first time the need to restructure offshore debt. Should Evergrande be declared in formal default on its bonds, a wave of cross defaults could be triggered, giving trusts limited room to negotiate extensions with investors or bridge over payment lapses by dipping into their own pockets, said one of the people.

None of the trust firms were immediately available to comment. Evergrande didn’t immediately respond to a request for comment.

Evergrande counts trust companies, which pool money from wealthy individual investors, as an important source of funding -- accounting for about 40% of borrowings at the end of 2019, when it last disclosed the figures. While the firms have been reducing their exposure to Evergrande and its peers since then, they continue to be massive lenders with at least $12 billion in developer-linked trust payments due just this month.

The risk of contagion into the $3 trillion trust industry will add pressure on policy makers to ease the crunch in the real estate sector, which has already triggered protests by home-buyers and investors in wealth management products sold by Evergrande and another embattled developer Kaisa Group Holdings Ltd.

Evergrande has done business with most of the 68 trust companies in China. It had $1.8 billion in trust loans maturing in the fourth quarter, with another $5 billion due over 2022 and 2023, according to Use Trust, a company that tracks the industry. The data only covers trusts sold to retail investors and not so-called single trusts, which are private placements and make up the bulk of Evergrande’s financing through the products.

If holders of an Evergrande bond declare it in formal default “cross defaults would be automatically triggered for the firm’s other debt instruments, including trusts,” said Daniel Fan, an analyst at Bloomberg Intelligence. “The company would face immense repayment pressure at once.”

Evergrande is planning to include all its offshore public bonds and private debt obligations in a restructuring that may rank among the nation’s biggest ever, people familiar with the matter said. It would include public notes sold by Evergrande and unit Scenery Journey Ltd., according to the people, who asked not to be identified discussing private information. Grace periods for interest payments on two notes from Scenery Journey end Monday and could mark the firm’s first default on public debts.

Chinese authorities, including the central bank and the securities regulator, sought to reassure investors shortly after Evergrande’s statement late on Friday, reiterating that broader risks to the economy can be contained.

Top of mind for regulators is social stability. Evergrande sparked protests earlier this year when it missed payments on 40 billion yuan ($6.2 billion) of wealth management products, sold to retail investors including its own employees. Some investors in its trust products are high-net-worth clients of commercial banks, which means the spillover could extend beyond the already embattled trust sector, people familiar with the matter said.

The government of Guangdong, the southern province where Evergrande is based, summoned founder Hui Ka Yan to express concern over the company’s Friday announcement and said it would dispatch a team to the developer to ensure “normal” operations.

Trust firms have this year defaulted on more than $10 billion of developer-linked products, which were till recently seen by wealthy Chinese and institutions as a place to park money. The firms have sought to cut exposure to the sector, reducing their outstanding loans 17% by June from a year earlier, according to the China Trustee Association.

The potential damage is already seeping out. Jiangsu Yanghe Brewery Joint-Stock Co. said late Friday that payment on an Evergrande-linked trust product that a unit bought from Citic Trust is now overdue. The liquor maker held 2.3 billion yuan in outstanding trust products as of early November, with about 648 million yuan linked to Evergrande, according to responses to investor questions on an inquiry platform run by the Shenzhen exchange.