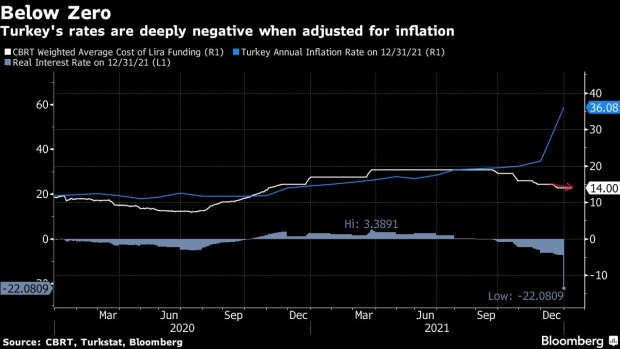 After a run on the lira touched off the fastest inflation in nearly two decades, Treasury and Finance Minister Nureddin Nebati laid out an agenda that puts the spotlight on prices and takes some of the political heat off the central bank.

Consumer-price growth won’t accelerate after this month -- and should remain largely flat until a seasonal improvement in the cost of food leads to a general slowdown in the summer, Nebati said in an interview Thursday.

The scenario may seem far-fetched after the lira lost as much as half its value in three months and with interest rates adjusted for prices likely stuck well below zero for months to come.

It’s also a view that flies in the face of rising pessimism from the likes of JPMorgan Chase & Co. and Goldman Sachs Group Inc., whose economists predict last year’s currency crisis could send inflation beyond 50% in the first half -- it ended last year at 36% -- and foresee little relief until later in 2022.

When prodded on the direction of near-term central bank policy, Nebati said only that “we need to wait and see what happens in January, February and March.”

The bank’s next policy meeting is scheduled for Jan. 20.

In his first interview with a foreign news outlet since being named finance czar last month, Nebati captured the evolution of a new economic program unveiled late in 2021 by President Recep Tayyip Erdogan.

Erdogan’s stated goal is to boost growth and free the economy from the burden of higher interest rates he says are imposed on Turkey by the “global barons of finance.”

The Finance Ministry’s top priority in recent weeks has been to stem the lira’s decline after Erdogan roiled markets. Last month’s emergency measures under Nebati’s stewardship -- including a government program to protect lira savings from currency declines -- brought a level of stability to markets.

“What we need to focus on right now is inflation,” Nebati said. “We have no issues with the exchange rate. It’s on its own course.”

The 58-year-old was a deputy to Berat Albayrak, Erdogan’s son-in-law who served as Turkey’s economy czar for more than two years until abruptly stepping down in November 2020.

Nebati’s family owns a textile business and the minister had a board seat at Musiad, a business group with historically close ties to Turkey’s Islamist and conservative parties, including Erdogan’s ruling AK Party and its predecessors.

Thrust into the role of finance minister, Nebati must now keep a grip on prices with inflation at the center of political and economic debate around the world.

In Turkey, inflation is a deep-rooted problem that’s long hamstrung the economy. But it was the president’s intense pressure last year for lower borrowing costs that unleashed an unprecedented rout in the lira and stoked inflation to the fastest rate of Erdogan’s rule.

Following four aggressive interest-rate cuts that lowered the benchmark by 500 basis points since September, the central bank has put easing on pause until the end of March to assess the outcome of its monetary stimulus.

With the lira no longer in a free fall, Nebati expects the lira’s weakness and rising energy costs to feed into inflation in January and then to preside over a natural decline to more manageable levels at the end of 2022. And then begins a year that could prove fateful for the 67-year-old Erdogan’s political future.

“There is only one thing that’s left and that’s inflation,” Nebati said. “We’ll enter the general elections in June 2023 with single-digit inflation.”

Erdogan insists Turkey has been at the mercy of foreign capital and should no longer prioritize higher rates and strong inflows. The president holds the unorthodox belief that lower borrowing costs will help slow price gains -- the exact opposite of the consensus view among the world’s central bankers.

But the market turmoil as been sobering, with emergency measures announced to tether the currency.

“Nobody expected a run on the lira this strong,” Nebati said. “We resolved the exchange rate issue. Now our priority is inflation.”

The government will keep juicing up the economy, but this time credit stimulus will be “selective,” he said.

The Credit Guarantee Fund, through which companies could access borrowing backed by the government, is expected to announce a new loan package by the end of January, Nebati said. Manufacturers in critical sectors will benefit from those cheaper loans, he said.

The ministry will also inject capital into top state banks to ensure they keep lending to businesses, he said, with an announcement on the size of the boost by the end of January.

“The year 2022 will be one of turnaround, stability and one where things get back on track,” Nebati said.