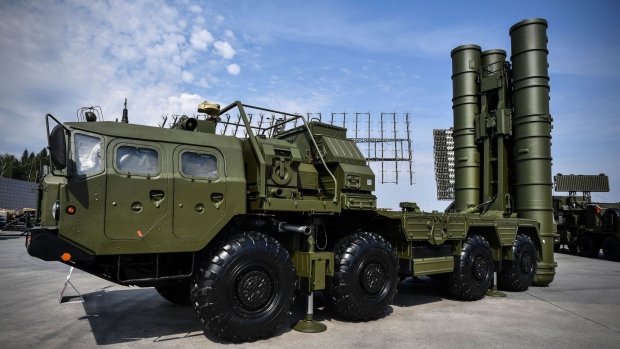 (Bloomberg) -- Turkey is sticking to its demands that the U.S. transfer missile technology and share production for Ankara to end its pursuit of Russian air-defense systems that has alarmed NATO partners.

So far, “only Russia has responded to Turkey’s needs suitably,” Defense Minister Hulusi Akar said in an emailed response to questions ahead of a virtual meeting of North Atlantic Treaty Organization defense ministers starting Thursday.

Turkey is thought to have last week carried out its pledge to test the S-400 missiles it bought from Moscow in 2019. While that fits with President Recep Tayyip Erdogan’s regional projection of Turkish power, it was also likely a calibrated snub to the U.S., which for years has refused to comply with Turkey’s conditions for purchasing its Patriot alternative.

Akar dismissed allies’ criticism of the missile firing, in an implicit confirmation that it had taken place.

“Every defense procurement includes tests and system controls,” he said. The S-400s won’t be integrated into NATO’s command-and-control infrastructure, but rather “used as a standalone system similar to the use of Russian-made S-300 weapons that exist within NATO.”

That was an apparent reference to Greece, a traditional rival that’s locked in disputes with Turkey over energy finds in the eastern Mediterranean and the future of divided Cyprus, and has the missiles in its armory.

Yet the reasoning is unlikely to meet a receptive audience. Russia’s muscle-flexing in eastern Europe in recent years has prompted NATO to step up its defense posture, and the bloc is adamant that Turkey find alternatives to its Russian technology.

“We, along with our whole NATO alliance, have done everything we could to divert Turkey from buying a missile defense system by our acknowledged adversary Russia,” Kay Bailey Hutchison, U.S. ambassador to the alliance, told an online press conference in Brussels Wednesday. “That they have tested a S-400 Russian system within our NATO alliance is very troubling for all of us.”

It’s especially worried that the advanced S-400 would enable Moscow to gather intelligence on the F-35 stealth fighter made by Lockheed Martin Corp. The U.S. has suspended Turkey from co-production of the plane as punishment for taking delivery of the missiles and raised the specter of economic sanctions if they were activated.

U.S. Senate Foreign Relations Chair Jim Risch said this week that additional sanctions against Turkey for testing the S-400s were at the top of his list for after the presidential election.

With positions seemingly far apart, Akar said Turkey is continuing talks for a missile-defense system made by the French-Italian consortium Eurosam, and could buy the U.S. Patriot under the “right conditions.” He alluded, however, to the opposition in Congress toward a deal with Turkey.

Erdogan Tests His Bond With Putin to Potential Destruction

“If you are selling a system, it is your duty to persuade whoever necessary and deliver the system,” he said.

The S-400 row is just the latest flashpoint in Turkey’s relations with its allies in recent years. Others are rooted in the war in Syria and Washington’s refusal to extradite the Islamic cleric who Erdogan says orchestrated a failed coup in 2016.

But the Russia link has sparked concerns that Turkey’s determination to play a bigger role in its neighborhood is loosening its bonds to the West. Akar said the Russian missiles were a necessity and didn’t mean Ankara was drifting away from NATO.

Turkey’s fulfilling all the responsibilities expected of members, he said, including spending 2% of its GDP on defense. But it wants allies to “understand and address its security concerns.”