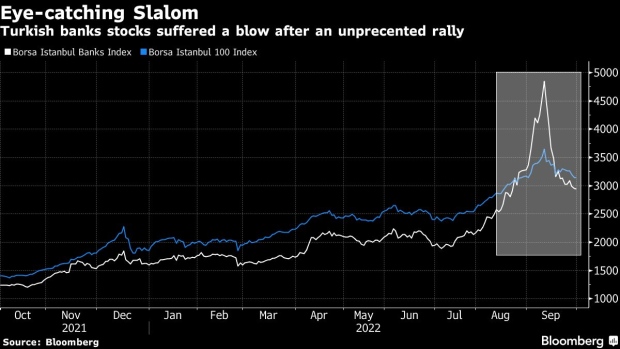 An employee uses a smartphone on the trading floor at the Borsa Istanbul stock exchange in Istanbul, Turkey, on Monday, June 25, 2018. The gains in Turkey’s lira that followed Recep Tayyip Erdogan’selection victory fizzled out as investors worried that the president’s sweeping new powers may stymie efforts to rein in inflation and the widening current-account deficit. Photographer: Kostas Tsironis/Bloomberg , Bloomberg

Turkey began rounding up suspects in an investigation into alleged stock market fraud that led to a plunge in equities last month.

Istanbul’s chief prosecutor started the probe on suspicion of organized activity that violated Turkey’s capital markets law and issued a detention warrant for 10 people, two of whom remain at large, state news agency Anadolu said on Sunday. Meanwhile, the country’s regulator, the Capital Markets Board, said it’s filing a criminal complaint against those people, accusing them of market fraud due to transactions in the futures market.

The arrests come after a sudden reversal in Turkey’s stock market, where banking equities dropped 39% in a three-week long rout that started on Sept. 13 and was beginning to threaten some brokerages’ financial stability.

The developments put Treasury and Finance Minister Nureddin Nebati in an uncomfortable position as he had hailed the preceding rally as a “sign of investor confidence” in the Turkish equity market. “Our capital markets have been restoring trust every day and are confident about the future,” Nebati tweeted on Sept. 11, just two days before the selloff began.

In an interview last week, President Recep Tayyip Erdogan predicted “speculative moves” during the rout and said the Treasury and Finance Ministry was “reviewing transactions” as part of a probe.

The rout, which erased about $14 billion in market value, followed an unprecedented runup in stock prices, during which the Borsa Istanbul Banks Index surged about 150% between mid-July and its peak on Sept. 12. That was accompanied by increased levels of trading in futures and leveraged markets.

The steps being taken now mark the most dramatic move by Turkish authorities to try to limit the political fallout. Last week, Turkey’s regulator asked local brokerages to help curb stock volatility, while custodian bank Takasbank took over some shares in three companies as collateral while providing liquidity to brokerages, according to an exchange filing.

Turkish bank stocks have been underpinned by local investors’ search for hedges as inflation has climbed past 80% this year. However, the magnitude of the rally left many analysts and investors confounded. Gains among banks were led by Sekerbank, TSKB and Vakifbank, which rose 370%, 303%, and 251% respectively.

Authorities have started reviewing transactions in the market for the past 12 months and agree that some moves during the two-month rally were disruptive, a senior official told Bloomberg last month.