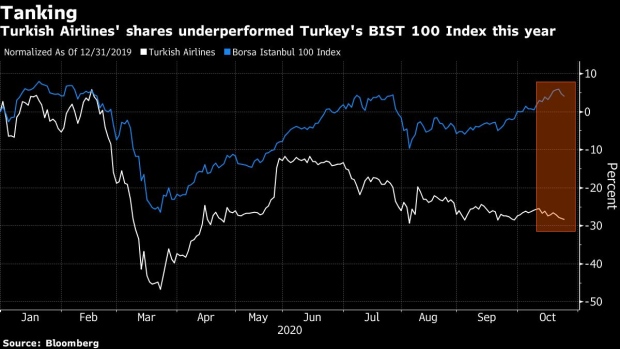 (Bloomberg) -- Turkish Airlines will be putting foreign national pilots on unpaid leave to mitigate the impact of the coronavirus pandemic on its finances, according to company emails seen by Bloomberg.

The national flagship carrier has told some of the foreign crew by email that their leave starts from Nov. 1 and that the decision would be reviewed after six months. The company emails don’t state how many pilots will be affected.

It wasn’t immediately clear whether Turkish nationals would also be affected. A spokesman for Turk Hava Yollari AO, as the airline is officially known, declined to comment. The Hava-Is labor union, which represents around 75% of the airline’s 30,000 employees, couldn’t be reached by phone during the weekend.

Like carriers worldwide, Turkish Airlines has been hit by a combination of border closures and a slump in travel during the pandemic. It reported a loss of 2.23 billion liras ($280 million) in the second quarter, with passenger numbers down by almost two thirds so far this year.

Unlike many peers, the carrier has refrained from job cuts or applying for a government bailout. Instead, it has pared pilot wages by half through 2021 and reduced salaries for other workers. The latest decision is in line with an official proposal floated in August, when aviation authorities asked airlines their opinions on dismissing foreign staff before Turkish nationals could be fired.

Chairman Ilker Ayci said early in the pandemic that the airline would keep jobs but some “sacrifices” would be needed down the road.

The company’s shares are down 28% this year, compared with a gain of 4.1% for Turkey’s benchmark Borsa Istanbul 100 Index.